The Oranges - East and West - A Tale of Two Abandoned Cats 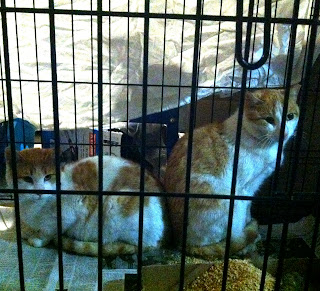 The "Oranges" - East and West

These two cats appeared in our backyard in early January.  They are two shy brothers that remained together after they were most likely abandoned.  Somehow they managed to weather the snowstorm, always sticking together.  We watched as they snuggled together and shared their food.

We finally trapped them on March 4 and had them neutered, tested and given rabies shots.  We initially thought they were feral but it seems they once belonged somewhere.  They were traumatized at some point, perhaps when they were dumped so they are somewhat shy.

They are need of a patient, loving home, ideally together.  We already have 4 cats of our own so we cannot keep them.  Please consider taking these boys in.