Better Left Unsaid? On Last Suppers And Other Morbid Thoughts 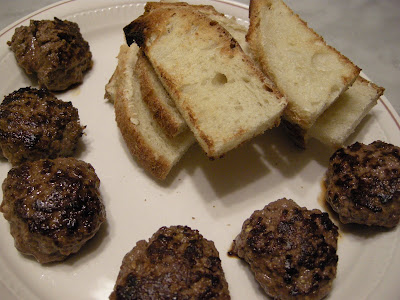 After much hesitation I have decided to share why it is I have not been blogging, given that it somewhat easier for me to write than to tell...

How many of you have joked around about what you would eat if you only had one meal left?

I know I have. During just such conversations I have conjured up deliciously rich meals of grilled lamb chops, potatoes gratin or perfectly roasted duck with crispy potatoes, goat cheese salad with lardons and a creamy chocolate dessert. Yet now, when faced with the strange reality of possibly only having a limited number of meals left before major surgery and not even being that hungry, I don't even know what to ask for.

One thing that came to mind was moose. Not because I have an especial fondness for moose but simply because I have never tasted it . Besides, B. from Wasilla was kind enough to send some to me and I figured I'd better try it while I still had the chance, as B. made it sound like one has lived til one has tried moose

But before I ramble on about moose and last suppers, which are certainly far more amusing then that which I feel compelled to report, I must tell of the ill-fate that has led me to do so. My poor health over the past several months has finally led me down a path upon which I never expected to find myself. The past few weeks have been filled with CT Scans, MRIs, doctor visits and a disturbing diagnosis. The tests have shown a rather large mass on one of my ovaries and there is a strong suspicion I may have ovarian cancer. I am scheduled for surgery this Wednesday and I am terrified to say the least.

I am trying not to worry about how Izzy will be and what he will eat without me (he has never spent a night without me) and instead focus on what I need to do to get well but it isn't easy. I have been preparing Izzy for my surgery little by little. First I told him that there is "something bad in my stomach that needs to come out". Then I mentioned the word "operation" and he wanted to know if it would be like the operation the kitties had, "where they take out their girl parts." Apparently I didn't need to do as much explaining as I thought I would.

As for eating, well I can't do that much of it. A few small meals a day are about all I can take. Moose sliders last night (very lean and tasty, but a bit overcooked, will have to try again) Vietnamese food tonight and not sure what my last meal will be for tomorrow night. The day before the surgery I need to go on a 24 hour clear liquid diet. D. of "real milk" fame and the doyenne of stock-making, was kind enough to stop by today with three types of stock. My friend L., was surprised to read the label on one which said, "Beef Hoof"; the others were beef and chicken/turkey. Those should keep me nourished, along with some tea and apple juice.

Izzy will have you for a very, very long time, I'm sure. Rest assured that your friends who have long benefitted from your tasty foodie treats and your loving support are here to provide the same to you. I know I speak for many when I say, we are here for you in whatever way you need us to be. You are much loved Ms Brownstein.

lynn, i will roast you lots of veggies--and take the skins off!

Ms B, I was very saddened to read about this obstacle you have come across in your life, I am sending positive thoughts your way and hopefully this will all be just a hurdle you have to overcome.

I don't know you personally but I am fond of you and your family because of the wonderful stories you have shared with us here on Blogger.

Be strong and focus on your recovery, you will be around for Izzy and everyone who loves you for a very long time.

very sorry to hear of your illness. i do hope you get well!

My comments wouldn't express what I was trying to say, so I'll just second the other posts.

hey there lynn - hope your surgery brings the best news possible under the circumstances. Sending lots of love from down the block. If you need anything just ask.

lynn,
I'm so sorry to hear this - I'll be thinking of you tomorrow and hope it all goes well!!

Oh dear, it's been ages since I've read your Blog. This was not the post I was expecting. My dear, I'm thinking of you and know you will get through this and be eating wonderful meals with Izzy in no time. Let me know if you need any delightful treats from England. Marmite? Pork Faggots (my lastest discovery).

Lots and lots of love.

Please know many positive thoughts are directed your way from the North.

Lynn, I feel like we have been old friends forever. Whatever you need, I'm here. I'm not far away. If I can do something, just ask.

At the very least, know I'll be thinking about you, sending you strength and love. You are one tough chick, which is why I like you so much. If anyone can do it, you can kick cancer's ass (or whatever it is).

I am at a loss for words, so I'll just shut-up. Let us know soon. I'll be checking your blog for updates.

May you have millions of last meals to ponder. You and your family will be in my thoughts.

Lynn, I'm so sorry you're going through this. You are a wonderful mother and you deserve a clean bill of health so you can enjoy many, many more suppers (and breakfasts and lunches) with your Izzy.

I'll keep you in my thoughts.

Hi Lynn,
Just wanted to let you know that I will be/am thinking of you and hope you feel better soon. Izzy is so lucky to have such a great mama!
--Katie (blog reader and LLL member from Hoboken)

Holding you in the Light in Tennessee.

thinking of you and your family lynn! if there is any thing we can help with (run to the store etc) let me know

Lynn, I am holding you and your joyful nature in my thoughts. I send you strength for a speedy recovery. Here's to having that long lunch we spoke of very soon. Much love to you and your family.

Lynn, you are in my thoughts and wishes, I hope that you recover your health and strength and appetite with all speed. I agree with Olga's comment to focus on your recovery right now, because you will be Izzy's Mama for a long time to come!

I know our paths have crossed in the food blogosphere, and I just want you to know that I am wishing you (and Izzy, of course) the very, very best through this difficult time. Sending strength and hope and support.