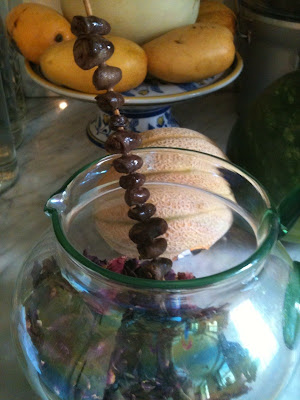 What more could I wish for than a friend who would prepare a slew of skewered chicken hearts for me during my time of need?

The call for liver went out and it was answered with hearts, another great source of iron, in case you were unaware. My friend "X" who would rather remain nameless and initialess, invited Izzy and me to dinner the other night. I don't think I have dined at a friend's house for at least six months which made the dinner a real treat. I haven't been able to go out much but since A. was out of town and I was having a good day, I figured I could muster the energy to take the three minute walk to get there.

I had no idea what she was cooking up but was overjoyed to find her grilling several skewers of organic chicken hearts when we arrived. I wasn't even aware that she ate chicken hearts so they came as quite a surprise. And that was only one part of our dinner. She had also prepared a lovely Turbot en papillote along with sauteed spring vegetables.

Now the meal was delightful but the chicken hearts stole the show. I have never seen so many chicken hearts gathered in one place. Yes, I have nibbled on the occasional roasted chicken heart while preparing chicken at home but I am quite certain I have ever ingested as many chicken hearts in all my life as I did the other night. To top it off, I even was able to take some hearts to go since Izzy was not quite as smitten with them as I.

I have been reading and reading. Your cousin can barely boil water.

I'm curious as to how chicken hearts are prepared... and a little leery!