Of Blood and Liver: (Looking For Liver In All The Wrong Places) 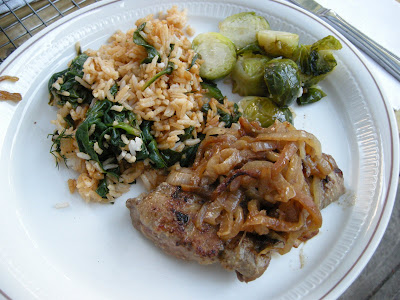 You see of have a bit of a problem. My chemo sessions are coming to an end ( only three left, YIPPEE!) which is wonderful but my body is done with it now. My blood counts have dipped so low that I skipped my last session. I was given what I like to call my "get out of chemo free card".

Even though I was thrilled to skip a week, having low blood counts is really not good because I am now scheduled for a blood transfusion, which I would like to avoid if at all possible. Which is where the liver comes in. The doctor has told me that there isn't anything I can do to raise my hemoglobin, which registered 7.5 last week (normal is 11.5-16), and needs to be above 8 to avoid the transfusion. I have trouble believing that nothing will help and have heard tell that copious amounts of iron-rich foods might actually help raise my hemoglobin. Liver tops the list but finding the grass fed/local/organic variety in Jersey City is a different story.

I put out a plea on Facebook and made a few phone calls. A couple of offers came in. M. a teacher at Izzy's school offered to bike some over from Brooklyn and E., a neighborhood friend, offered to make some for me. I was holding out for some from my sister who works at a veritable mecca of local livers and other meaty bits. Sadly I never saw that liver and was forced to send A. out foraging this morning. He went to every local supermarket on his scooter and only unearthed livers of questionable provenance. Best not to eat those conventional livers as they would only be adding more toxins to my body which surely doesn't need any extra. I resigned myself to being liver-less, and continued to gorge on lentils, Floradix, quail eggs and greens.

In the late afternoon, my luck changed. The phone rang. It was E. and she made my day. She was checking in to see if I had procured any liver. When she heard that I hadn't, she offered to stop at Whole Foods and bring some over. She also offered to cook it but I declined, welcoming the opportunity to cook something new with the bit of energy I had. She showed up at my door with a bag filled with the fixins for a Greek feast; a pound of local veal liver, baby spinach, Brussels sprouts and an onion. She explained her method for making liver Greek-style and I followed her instructions. Her liver recipe is quite similar to this one, only she substitutes lemon juice for the vinegar. The heaps of onions are the best part!

She also shared her recipes for the side dishes. The first was Jasmine rice with Baby spinach. I cooked 1.5 cups rice in one pot and in another pan I sauteed 1 diced onion until tender, added a heaping tablespoon of tomato paste, a bit of water, and two large packages of spinach which I cooked briefly until wilted. I sprinkled the spinach with plenty of salt, pepper and chopped fresh dill. Then mixed in the rice and the juice of one lemon.

The other side were simple Brussels sprouts which were blanched and tossed with sauteed garlic, olive oil and lemon.

Aside from a slight overcooking of the liver, the meal was a success. As I ate I imagined each bite of liver boosting my blood cells and I was grateful for having someone like E. to make my liver wish come true. This livery meal is only the beginning of my liver experiments as I am expecting liver deliveries from my brother G. and my friend Y.

thinking of you & glad to find you're posting :}
wishing you strength & happiness & good blood counts :]

Thanks for your thoughts!

Cooking in an iron skillet is supposed to give you more iron.
Mary