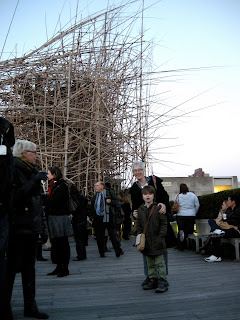 As Izzy and I walked home from school today, he seemed a bit forlorn.  He was feeling left out as he watched his classmates walk off for a playdate, knowing we had no particular plans.

I thought I would cheer him with a cup of hot vanilla (warm milk, honey and sprinkle of cinnamon dust) which we both sipped as I looked through the Weekend section of the New York Times.  Yes, I still read the hard copy of the paper. Am I the only one left?

I immediately honed-in on Last Chance section of the Art listings, where I noted that the Starn Brothers Bambu exhibit on the rooftop of the MET would be closing this weekend.  I suggested we go since the MET is open until 9 on Fridays and Izzy quickly agreed.  We made it there by 5:30, just in time to catch the gorgeous sunset upon the foliage of Central Park.  Better yet, A. happened to be working nearby and joined us.  Not only did we catch Bambu - which is a wondrous configuration of bamboo poles - but we also managed to peek in a few other places, including the Egyptian section - where Izzy clamored to see the mummies.  Izzy was skipping from room to room but I had to cut our visit short since it was already 7 p.m. and we needed to eat dinner.

We hopped in a cab across the park and made our way to Gazala Place which I have been meaning to write about for ages.  I discovered this narrow storefront in Hell's Kitchen in springtime and somehow managed to eat there during my treatments.  I ate there a couple of times on the days my treatments were canceled and I actually had an appetite.  This delicious Middle-Eastern spot features Druze cuisine and it was so delicious, I was eager to have Izzy and A. join me there.  We ordered the Mezze plate which showcases many of the wonderful offerings, including the smoky baba-ganoush, meat-filled cigars, Kibbe, falafel and hummous, served up with their incredible version of pita bread, made on the premises.  This paper-thin delight is addictive and Izzy held onto the bread basket to make sure he got the last bit before the waitress cleared the table.  Meanwhile, we polished off a fresh Fattoush salad (cucumbers, tomatoes, scallions, lettuce, crisped pita), a roasted fish and a lamb/beef kafte platter.  By that time, Izzy was falling asleep in the noisy restaurant and it was time to waddle along.  Taxi to the Path and we were on our way.  Certainly a memorable afternoon/evening for all.

Gazala Place will probably be around for awhile but you can only catch the Starn Brothers exhibit until Sunday.  If your kids are over 10 you can even go on the guided tour atop the bamboo poles for a real adventure. Definitely worth the trip!
Posted by Izzy's Mama at 10/29/2010 10:27:00 PM