A Visit From My Cousin Sherri (And her boyfriend Silvio): Long Lost Relatives 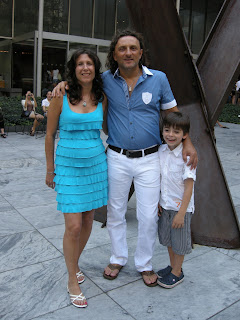 I have but two first cousins.  Sherri and Danny.  As a child I had heard tell of them but we were never given the opportunity to meet. Distance was a factor since they grew up in Toronto and I, New Jersey. Such a shame since Sherri and I  were born only a month apart and it would have been nice to have had a relative, so close in age.  We finally met, quite briefly in our late twenties but our meeting didn't amount to much.

Last year, things changed.  Sherri, feeling the need for some familial connections, made an effort to get in touch with me and we began a correspondence, via email and phone.  We made plans for a visit and then I became ill.  We put the plans on hold until I recovered.

Little did I know what I was in for when we arranged to host Sherri and her boyfriend Silvio, this past August.  We agreed to spend half of their visit on Long Beach Island (at my dad's) and half the time in Jersey City doing New Yorky stuff.

It all began with picking them up at the airport.  Izzy, A. and I went to Newark airport to greet them and it was only then I realized that I had no idea what they looked like.  I tried contacting their cellphone but to no avail.  Instead I found myself approaching strangers with suitcases, while trying to surmise which ones resembled my cousin.  They eventually found A., who found them at customs.   We all piled into the taxi and were on our way to the shore.  Turns out that Sherri looked pretty much the way I remembered her from our one meeting so many years ago.

Thankfully, we got along swimmingly, catching up on our entire lives along the way.  Instantly apparent was that we shared many physical similarities, primarily body shape and size.  We also seem to share an immense fondness for cats, both of us calling after them in incessantly high-pitched tones.  Of course you won't ever find me referring to my cats as "pussies" and therein lies one fundamental difference between us.  Not to mention the disturbing fact that my cousin must rank in the top 3 pickiest eaters I know, far pickier than even some toddlers I have encountered.

Now while we were at the beach, my cousin's picky habits were of little consequence as she selected her breakfast from the options available in my dad's gigantic pantry and we dined out the rest of the time.   When we got back to Jersey City, her food issues became glaringly apparent.  I didn't really comprehend the extent of it until I noticed that she had been eating the same thing for breakfast every day, toast with either peanut butter or almond butter.  When I offered French toast, pancakes or waffles she declined.  Now really, who can decline a fresh waffle?

Now despite her picky ways, my dear cousin managed to find a beau, Silvio, who is quite the gourmand. He is game to try most anything and comes from a family of cooks.  In fact he showed us photos of his family and their sausage and cured meat cellar.  He regaled us with tales of the wondrous foods his family cooks up and we we also discovered what a fantastic cook he is.  One Saturday we went to Union Square and shopped together for dinner.  We bought lamb chops from 3-Corner Field Farm,  along with some purple potatoes to complement other ingredients we had at home.  When we got home, I became his sous-chef while he prepared dinner.   We had grilled lamb chops with herbs, tomato-basil salad, potatoes with rosemary and a platter of radishes.


Everything was lip-smackingly delicious.  Having Silvio around provided an important counter-balance to the pickiness factor and kept us well-fed and content. From seafood feasts on Long Beach Island, to dinner at ABC Kitchen and a night at Bin 14, overall we ate quite well during my cousin's visit.  At least I know Izzy and I did!  And I do hold out hope that Silvio's eating ways may one day rub off on my cousin!
Posted by Izzy's Mama at 10/15/2010 11:19:00 PM

Lynn... Silvio, Carina and I just read your blog and had quite the laugh; my eyes are still watering.

It was nice to talk to you today and to hear my "pussie" calling out to me in the background.

I am looking forward to your visit here in Toronto and will enjoy taking you to Silvio's parents for an authentic Italian dinner.