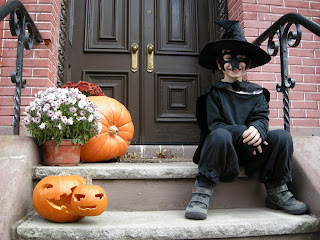 Izzy awoke slightly sulky on Halloween morning.  Instead of eagerly awaiting trick-or-treating, he was fretting over his costume.  He had thought he would be his favorite heroine, Franny K. Stein, mad scientist, but decided that since he had already sported that costume for his birthday (and several other times thereafter), it was no longer very interesting.  In search of new costume ideas, he emptied out his drawers and turned his room upside down.  It was then he came up with this fetching get-up, that of a "Bat-witch".  With that out of the way, he could concentrate on the days amusements. 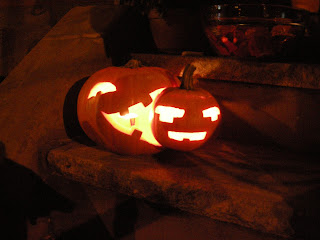 First up was pumpkin carving with this papa.  Leave it to A. to come up with a biting pumpkin.  Exactly what we needed to complete our festive front stoop display.  Seeing it illuminated was even better.

After pumpkin carving, Izzy spent the early afternoon at his friend J's birthday party, revving himself up by eating eyeball cupcakes.   After the party, at 5 p.m. it was time for trick-or-treating.  Oh, the creatures we saw!  In less than two hours, Izzy amassed enough candy to rot his teeth for years to come.

Back at home, warm and cozy, Izzy dumped his spoils upon the floor and sorted them out, putting most of it aside for the Switch-Witch.  He knew he could keep a small bowlful for himself but I didn't even have to tell him that he couldn't keep it all.  He was more than happy to give it up for the promise of books.