Passover is my favorite Jewish holiday and even last year, in the throes of illness, I somehow managed to host a pseudo-seder.  I can't even remember most of what I served but I somehow remember that David Lebovitz's chicken figured into the menu.  In any case, this year, now that I am feeling mostly well, I felt inclined to host not only one seder but two. I had my work cut out.

I tried to be organized about it and began my cooking on Friday, with the stock for my gefilte fish.  On Saturday I prepared the gefilte fish, horseradish and soup.  By Sunday I knew, tedium would be settling in.  At least that day would be dessert.  Chocolate-Chunk Macaroons and Chocolate-Caramel Matzoh - for no Passover would be complete without it.

At some point over the weekend, my "goyisha"(thank grandma for that term) friend Tracy posted on Facebook, seeking a good Passover dessert to bring to a Seder.  I told her of my cooking agenda and invited her to join me for a Chocolate-Caramel Matzoh tutorial.  And so it was that she appeared at my house early Sunday morning.  During our kitchen chit-chat,as preparations were underway, it somehow emerged that Tracy would be Sedering with none other than Maira Kalman.

Some people girls have all the luck, don't they?!... Still and all, even though I couldn't Seder with Maira myself,  I was especially tickled by this news.   I so fondly recall my days teaching English at the Lycee and introducing her books to my students.   I read "Ooh La-La Max in Love"

so many times I  practically knew it by heart...And if you love whimsical books or Paris or both, please read it too, along with the rest of her wonderful works.

But wait, back to my Chocolate-covered Matzoh. Knowing that Maira would be sampling it made the preparation that much more fun.  Tracy and I each prepared a batch of it and had a grand old time doing so.  Having a friend in the kitchen was a treat after several days of solo cooking.  And so I mentioned that I would be preparing Chocolate-Chunk Macaroons that evening...figuring that Tracy could be two treats to Maira's Seder and I would have a partner in more cooking!

By the time evening came, I had just about had enough of cooking.  When Tracy called to ask if I would be up for baking the macaroons, I was just about ready to take to my bed.  Instead I told her to stop by and see if she couldn't just perk me up enough to get it done.  When she got here, I had already gone up to bed but tried to muster a second wind.  And lo and behold, we whipped up two batches of macaroons in record time.

My cooking student was so pleased with the results of her first Chocolate Matzoh experience that she went on to prepare THREE more batches of the stuff to bring to Maira's Seder. Behold the spectacular results... 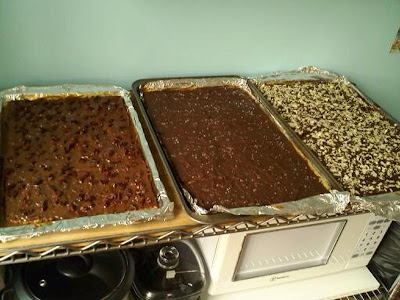 I couldn't have asked for a better student AND apparently her efforts were much appreciated and mine were rewarded.  The first night of Passover, Tracy  sent along this lovely photo of Maira and the matzoh.  What more could I ask for!! 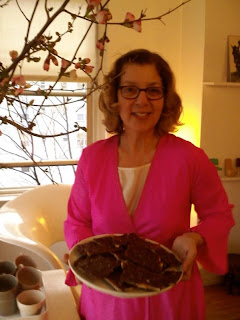 Happy Passover to all...

I made the matzoh candy with unsweetened chocolate this year and it was excellent. -RB

RB - What brand of chocolate was it? I am not sure I would enjoy it with unsweetened chocolate, just not satisfying to my sweet tooth. I have used bittersweet and semi-sweet Ghiradelli and lately Extra Semi-sweet Guittard. I think next year it might be time to have a side-by-side comparison/competition!

Thanks for the comment on my blog last time, I thougt I would return the kind words and the compliment.

Nice blog you have here as well.

Oh this looks so good! and I'm impressed that you were able to pull this off after having to get out of bed! I definitely do not have that sort of drive! I know this was a while ago, but how did your seders turn out?
~Nancy Lewis~

Hi Nancy,
The seders turned out well - though I could have used more guests at the second one - next year I will be more organized.
Lynn