Cramming It All In: Part I... The Vermin

Over a month has flown by since I abruptly stopped blogging. I am trying to recapture my blogging spirit, both for me and for Izzy, since part of the reason I started this blog was for him. It was the easiest way for me to chronicle his life, through my own, food-oriented lens. So much has transpired that I must back-track and fill-in, before continuing forward.

By now many of you know the main reason my keyboard has been silent but what you don't know is that there were other issues that interfered with my desire to cook, eat or write. The troubles were such that I began to think that we were being cursed with our own version of the Ten Plagues.

First there were VERMIN

Lice to be precise. On September 25th, I received a call from Izzy's school, explaining that one student from his class had a lice problem and that they feared Izzy was afflicted as well. The call came on a morning when I thought I might finally start to get my life back in order.

Orderliness of any kind went out the window as I ran over to his school to inspect. The evidence was clear and I escorted Izzy home, trying, unsuccessfully, not to freak out. As I had never dealt with lice before, not as a child* nor as a teacher, I felt ill-equipped to deal with it on my own. In the far recesses of my mind, I recalled an article in the New Yorker about the "Lice Lady". With 15 children of her own, she was clearly the nit-picker who would save the day. I searched for information about her and realized that Shabbat was coming which might make an appointment difficult and I couldn't imagine schlepping Izzy all the way to Borough Park Brooklyn. In my haste to find an adequate solution, I selected a company that offered at-home services. They were willing to dispatch a technician within an hour who would supposedly rid us of our itchy problem. The red flag should have arisen with their hourly rate of $125.00 but they assured me it would take around two hours. 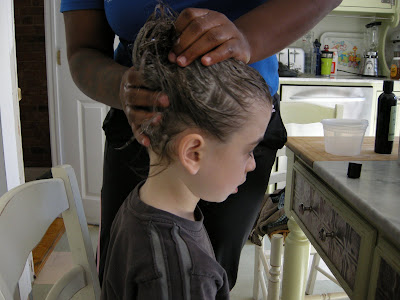 When the technician arrived, she set to work on Izzy, first applying a treatment shampoo, followed by a painstakingly long comb out with baking soda and Pantene conditioner. The entire procedure took in inordinately long amount of time and there were globs of goop all over my floor. I suspected that I had lice as well, which she confirmed, so I needed to be combed out too. The entire process lasted about 4 hours and with products cost over $600!!! I felt taken advantage of but reasoned that it would all be fine if we remained lice free. I continued to treat both of us with products and comb outs for several days and can happily report that we are both lice-free. 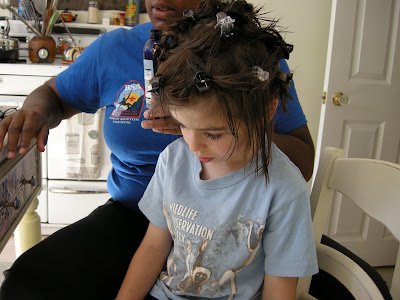 Our lice issues occupied my mind for several days, as I continued our treatments. A friend discovered that she was afflicted and I assisted with her comb-out as well. With laundering, combing and obsessing, little time was left for much else.

I have since realized that had I acted more calmly, I could have saved a bundle. I am now far more lice savvy and have even considered offering my own nit-picking service.

Meanwhile, another affliction was brewing, an ailment that has severely curtailed my eating...


* As a little girl, I would sometimes scratch my head and whenever my grandpa saw me he would say, laughingly, "What's the matter? Do you have "loiselach"..According to one of my brothers, my grandfather told them that he and his brothers always had lice when they were kids. I wonder why, since I know they didn't bathe much back in 1916 and lice prefer clean hair.
Posted by Izzy's Mama at 10/17/2009 10:00:00 PM