A Wonderful Concert and An Offal Meal: They Might Be Giants and DBGB 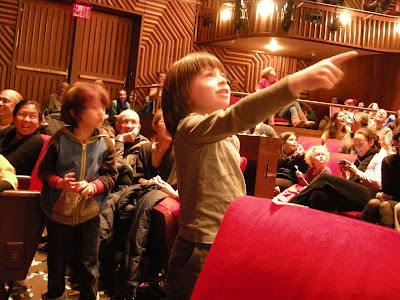 I don't know about you but I can live without most kid bands, with their grating tunes and annoying lyrics. They Might Be Giants are a rare exception. They are one of the chosen few that Izzy and I both adore. They started out as a grown-up band and still are but since Izzy was little they have been doing kid stuff as well, which I admit I love just as much. Their concert today, at the Skirball Center at NYU was as joyous and engaging as the one we attended last year. If you haven't heard the new CD, check it out here. It is edutainment at its very best. I might have done better in science class if my teachers had used it to teach the periodic table.

At today's concert, we unexpectedly found ourselves in second row seats (at the urging of ushers who told us to move forward to empties in the front) which made the concert that much more thrilling for all of us. Unlike last year,this time Izzy danced uninhibitedly in the aisles. The confetti machines were an added bonus, causing Izzy to race around excitedly, collecting heaps of it to take home. The concert, just a bit over an hour, was just the right length for antsy kids. 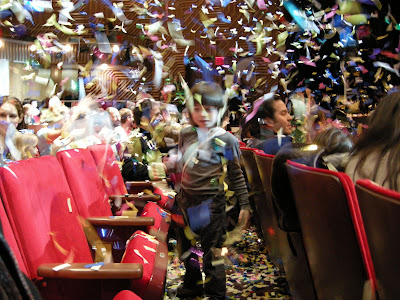 Izzy definitely worked up an appetite from all of his wiggling during the show so he was eager to continue on with the next part of our outing. Afterward we hopped into a cab and sped over to DBGB where we met my dad and stepmother for dinner. DBGB is Daniel Boulud's new, gentler priced restaurant on the Bowery, specializing in all manner of sausages. Also offering seafood platters and an enticing selection of offal. The menu is full of so many gems, choosing was not so easy for some of us. For Izzy, however, it was a breeze. He read over the menu and promptly selected the octopus appetizer and veal tongue for his main course. 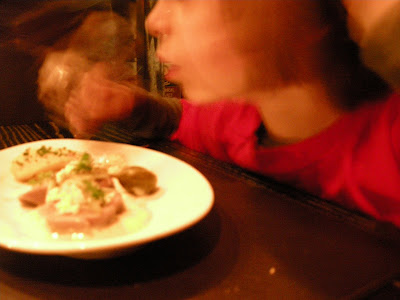 I chose the Duck Egg Bourguignon (an unusual preparation with a panko-coated egg served atop a portabello mushroom, accompanied by salad with duck cracklins) and the Crispy Pig's Foot (having somehow forgotten my Parisian pig foot experience). We were a table of tasters so even though I could not order everything on the menu, I managed to take in a decent sampling. As for my "Pied de Cochon" it was world's tastier and meatier than the one I had eaten in France. Even my dad, who was reluctant to taste it, had to admit it was a succulent morsel. 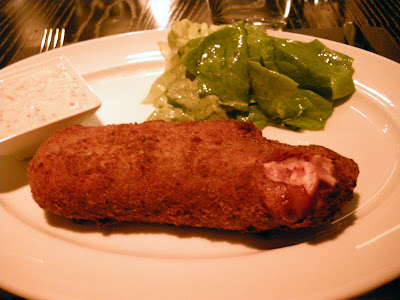 Just look at that trotter in all of its crusty splendor. Glad I didn't remember my past experience or I wouldn't have ordered it. Even so, I only managed to eat half of it, as I was trying to keep to my new way of eating and the the leftovers for lunch tomorrow.

With all of our sampling and the late hour, it's a wonder Izzy and I still had room for dessert but he had his heart set on some chocolate sorbet with whipped cream and I agreed to give it a try. At least it arrived quickly and our waiter offered it to us on the house, along with a sundae, as compensation for enduring an unusually long wait for our food. The restaurant was most likely overwhelmed after the wonderful review in the Times the other day, well-deserved to be sure.

Despite the dreary weather, our rare family excursion was a success. We will be looking out for the next TMBG concert in the NYC area. As for DBGB? There were so many dishes left to try I need to go back soon.. Tripe anyone?
Posted by Izzy's Mama at 10/18/2009 09:52:00 PM