Turning Snack And My Kitchen Upside Down: Kale and Seaweed Chips, Popcorn On The Side 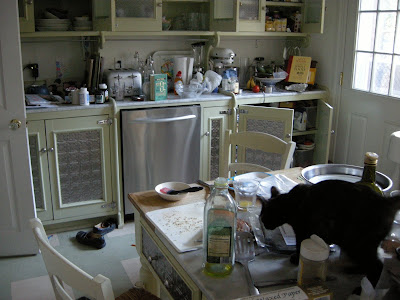 Early this morning, my husband poked his head into the kitchen and a look of horror washed over his face as he surveyed the scene... Cabinets flung open, cats on the table, dirty dishes strewn about and the loud sound of popcorn popping. He turned on his heels and fled...

"Snack Mom" had taken over the kitchen. Yes, I even set my alarm for 7:15 a.m. which is early for me, so that I could make sure the Kale and Seaweed Chips would be ready, along with two enormous vats of popcorn. I was inspired by The Yummy Mummy, who prepared kale chips as a snack for her daughter's preschool class. She outdid me by awakening at 5:30 a.m., an hour too ungodly for me to even consider, to prepare her snacks. I compromised by getting up slightly early, figuring I would somehow manage to get the three snacks ready, shower, make Izzy's breakfast and lunch and still get him to school on time.

Well with little time to spare, all notions of organization immediately flew out the window and chaos reigned. Olive oil was spilling, sesame seeds were flying and the cats were underfoot but somehow I did manage to get it all done. 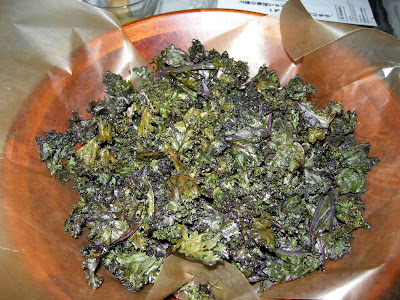 The kale chips are a must try. This preparation turns a chewy, weedy vegetable into a feather-light delight (just make sure not to under cook them. I can attest to the fact that the undercooked version is a tad too chewy).

The recipe is super simple: Break kale into bite-sized pieces, rinse and dry. Place in a bowl and massage with olive oil, then sprinkle with salt. Spread on a cookie sheet so that the pieces do not overlap, and bake at 350 F. for 10-15 minutes or until darkened and crisp, at which point they practically dissolve in your mouth.

As if those weren't enough (actually they weren't, children cannot live on weeds alone, can they?) I also prepared seaweed chips which had been calling me from the pages of The New York Times. Definitely a fun project to do with kids but this morning there wasn't much time for that.
All you need are sheets of Nori, water, salt and sesame seeds. Watch the video link for more precise instructions.

But the morning prep was not over yet...

While those were baking I started on the popcorn and Izzy's morning pancakes. As the kernels flew, his pancake bubbled. All was going according to plan. Izzy assisted as I dumped the steaming vat of popcorn into a brown paper bag and began a second batch. When all was said and done, we carted it all over to school and set it out. Would the Kindergartners and First-Graders even touch the odd vegetable chips? Only Pick-Up time would tell.

At 3 p.m., I popped into Izzy's classroom and found an empty tin of Seaweed Chips ( I hadn't made that many) and a few fistfuls of Kale Chips left. There was still popcorn in the bag but I had made vast amounts of it so that didn't surprise me. What did surprise me was the snack tally on the blackboard. Izzy's teacher, Miss C., had inspired some of the children to try the snack by finding out which snack each child preferred. Kale was the winner, although that doesn't mean they actually liked it. Still and all, they tried it which is progress, right?

It thrills me when Izzy's teachers are proactive in getting the children involved with what they are eating. Teachers can certainly have an influence on eating habits so I look forward to bringing in other healthful foods for his class to try.


p.s. The following morning, when I arrived at school bearing another snack, a little girl looked over at me, not knowing what I had brought in and announced, "I am allergic to all of that." I looked at her and asked, "What are you allergic to exactly?" and she replied, "What's in there. I don't like it." I assume that she thought there were more Kale Chips within and she had decided that she was "allergic" to vegetables!
Posted by Izzy's Mama at 10/19/2009 11:33:00 AM

I have made kale chips too and found that kids will just eat them up. I'm anxious to try the seaweed chips after reading about them as well. You've re-inspired me.
I don't usually comments, but I am a reader and want to say: a) sorry for your loss; b) it's nice to see your blog up and running again.

And you got two more hours sleep than I did. And our kitchens looked the same. How the hell did that happen?

Glad the class liked/tried them. I started going into Lucy's class and cooking with the kids every week. I haven't blogged about it yet. This week we made meatballs. They lOVED it. They really got into it. If Izzy's teacher is encouraging of food, maybe you should cook with them. I know you don't need one more thing to do, but I couldn't think of anyone better to do it!

iwannablogtoo: Thanks for commenting. Love to hear from readers. Glad to be writing again daily!

Kim: So wonderful that you cook with Lucy's class. What type of equipment do they have? Izzy's class has very little. I can't wait to hear the details. I have made waffles in past years. I definitely plan to do more this year as he is in a k-1 class so the kids are at just the right age.

Also, in the interests of full disclosure..Izzy's school is a 30 second commute!! Don't you have to schlep a bit more?

I contributed an electric frying pan. They have a toaster oven, fridge and hot plate (which I haven't used). The electric flat top actually does a great job. I was worried about how well food would cook, but the meatballs last week were done in a snap.

If I were you, I'd volunteer to do it in Izzy's class. It's a blast and some of the kids had never even seen garlic before, so it was fun to expose them to that. One thing - you should do the class in alternating small groups (a different group of kids every week, each group makes snack for everyone in class). The kids get so excited and everyone wants a turn doing every step, so any group bigger than 6 is bedlam.

I'll blog about it soon, but wanted to encourage you to do it. I imagine Izzy will be proud to have you there.

And yes, I schlep this shit all over the city. I'm a little envious of your commute.