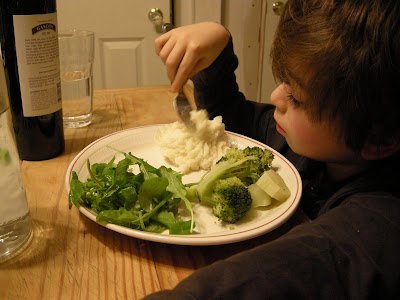 They do bring out the best in everyone. Just check out the comments I received on this post. I don't have the wherewith all to respond right now but maybe someone else will. And now to my story...

From mopping up dripping animal blood from my freezer to the buffalo roast I served for dinner, this Christmas day couldn't have gotten much worse.. and then it did. Any holiday cheer I may have had (and there wasn't much to start with) has been wiped away with the blood-soaked paper towels and buried with all of the food I tossed out when our fridge decided to go on the fritz.

After a lovely evening of wrapping gifts for Izzy to put under our tree, I awakened this morning to discover that our fridge/freezer was completely malfunctioning. Some areas were warm whereas others were frozen. Goat and buffalo juices were dripping everywhere. The sight was enough to turn even the staunchest of carnivores into a vegetarian. The mess was of such grand proportions that after the gift unwrapping, I was destined to a morning of freezer cleaning. We had no breakfast as I attempted to remove all bloody traces.

When I finally got around to preparing breakfast (while Izzy and his Papa played), I served scrambled eggs, breakfast sausage and toast. The sausage was from a mystery package that had defrosted and had to be used. It was one of many I had picked up at the greenmarket and I know not from which animal it came. It was most definitely not the tastiest of sausages. A. called it "possum sausage" and even Mama cat refused to try it. Indeed it had a funky flavor but at least breakfast (brunch) had be served.

After brunch, the matter of the fridge still plagued us. A. became intent upon fixing it himself and I had to remove everything and find a home for it, either out in the yard or in our vestibule which remains fairly cold. Somehow the entire afternoon disappeared and by the time it was determined that repairs were not going to happen, it was time to prepare dinner. I marinated a buffalo eye of round roast, part of the same share as my chopped buffalo which made for a fantastic meatloaf. I planned to serve it with mashed potatoes, broccoli and an arugula/mache salad.

All seemed set but the roast seemed to require additional roasting time, far beyond the suggested hour. By 7:30, I allowed Izzy to have a roast-less meal. We sat with him as we waited for the roast to reach the suggested internal temperature of 130 degrees. When it finally did, I immediately began to carve it, only to discover that it was unhappily overdone. Izzy had the first slice and kept chewing and chewing. Buffalo is an extremely lean meat and apparently should only be served on the rare side.

A. decided that it wasn't really buffalo meat at all and that I had been hoodwinked into purchasing a donkey butt. If nothing else it was good for a laugh. Soon it would be just a bad memory.

With dinner over, I was faced with yet another kitchen mess. I put Izzy into bed and came down to get to work when all of a sudden he started moaning from bed. He began crying intermittently, at times inconsolably and is now running a fever. A. got into bed with him to keep him company.

While I sit here and worry, I am certainly looking forward to better days and better dinners ahead. And a repaired refrigerator. Merry day after Christmas!
Posted by Izzy's Mama at 12/25/2008 04:30:00 PM

If it makes you feel any better, this summer our power was knocked out for a few days and obviously we lost some food. The worst part about the whole ordeal was the fact I forgot to put a bag of frozen chicken (which I never buy, but the husband did) in the cooler - and it defrosted in the freezer, and leaked chicken juice all over the bottom of the freezer.

And, by the time I realized this, the power had been back on for a few hours and the chicken juice was frozen solid. It was a nightmare.

what jerks. if they have such a prob with your blog, then why does it seem as though they are avid devotees? hmmmmmmmmm..
we also had a bad xmas, when a pipe burst xmas eve and we only got water back,... 48 hours later!!!!!
heres to and great AFTER xmas as well!
and hope izzy feels better