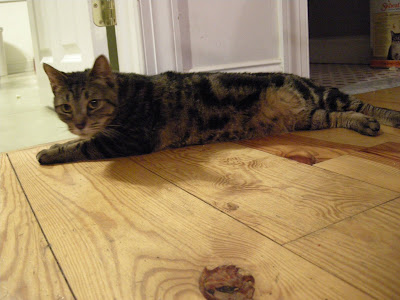 The day before Christmas Eve, I was scurrying around finishing up some elfish duties while my husband and child were charged with purchasing a Christmas tree. The entire afternoon, I attempted to contact them, begging them to shop for some much needed Christmas dinner ingredients. My texts and calls went unanswered and I fumed all the way home. Not only was I a Jewish girl fulfilling Christmas duty, but no help was coming from the Christmas side.

Upon my arrival, nearly four hours after I had left, I found an unadorned tree and Izzy and his papa acting peculiarly. I asked them where they had been and when they replied, "The Liberty Science Center", I became even more peeved. Then I asked if they had fed Mama cat and they said no. When I began to make my way upstairs to feed her Izzy couldn't contain himself. "You are going to find a surprise up there. There is a new Ca...Ca....Ca...CAT!"

"What??? You must be joking." I shrieked incredulously. I immediately ran upstairs, opened the bathroom door and found a large grey tabby cat cowering in the corner. What on earth was A. thinking?? I really didn't want another cat. Mama is enough trouble as it is. But no, instead of holiday preparations, my husband and child were out conducting cat interviews at the Liberty Humane Shelter.

A. somehow decided that Izzy and I both needed a cat that we could pet and play with. He has the notion that our new and friendly, "pound cat" or as he likes to call him, "cat pound", will have a positive influence on Mama. He explained that we could test drive the cat and return him if he and Mama didn't get along.

So far they have. It may even be that Mr. Pound Cat might is Mama's Romeo. They meow and frolic, and lounge in the same room. Mama watches with great interest as we pet and scratch her playmate. She has even ventured downstairs in search of him and today even made her way into the kitchen. Mr. Pound Cat has become quite a compelling player in our cat dramas. 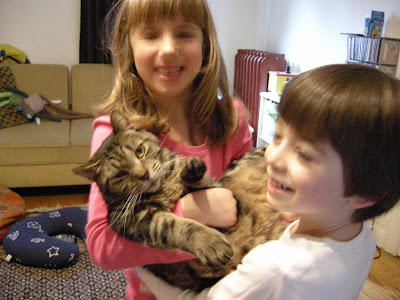 Both family and friends are charmed by his tigerish face and amiable demeanor. Izzy and his pals relentlessly chase him and he willingly obliges. Who knows? Perhaps A. was onto something. Despite my initial resistance, a new cat might be just the thing our household needs.
Posted by Izzy's Mama at 12/28/2008 11:59:00 PM