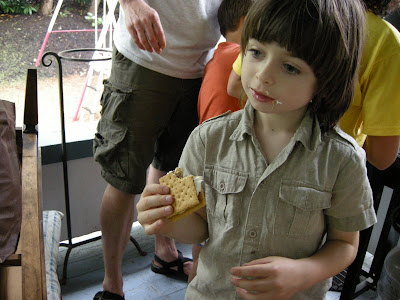 We unexpectedly dropped in on Izzy's friend M. and his family during an impromptu bbq. They were kind enough to invite us to join in and although we did not partake of the burgers etc, dessert was hard to resist. They were making s'mores.

Other guests were surprised to hear that he was over six years old and had never tried one before. I just hadn't gotten around to preparing the s'more of my dreams. I do love a good s'more but I wanted his first one to be the best. I had envisioned a s'more, prepared with homemade marshmallows, homemade graham crackers and a superb chocolate. That will be for next time.

This first s'more was of the classic variety. Hershey's Chocolate, Campfire Marshmallows and Honey-Maid Grahams (or Nabisco). It may not have been exactly the s'more I had imagined but clearly he was smitten.
Posted by Izzy's Mama at 6/14/2009 09:44:00 PM