A Day On The Lower East Side:Eldridge Street Synagogue, Roast Pig and Pickles 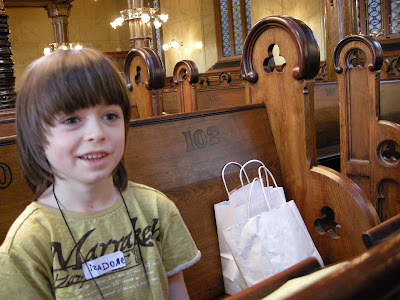 Given his druthers, Izzy would have stayed in the backyard all day, happily playing in mud. I was almost inclined to indulge him for I could have easily lazed on our swing and read the Sunday paper. Giving in to slothfulness was not an option, since earlier this morning I had come across an idea for an outing to the Lower East Side and I couldn't shake it.

There was a family program at The Eldridge Street Synagogue which promised to turn kids into detectives as they explored what life was life during the synagogue's heyday. The date 1909 was included in the event description and since that is the year of my grandfather's birth, I took it as a sign that we should visit today. As it has long been on my list of places to visit, I coaxed Isadore to join me.

We arrived at the beautifully restored synagogue, now nestled in the middle of Chinatown, just in time for the event to begin. Having grown up attending a modern, rather ugly synagogue, it was a pleasure to visit such an ornate and beautiful example of Jewish house of worship. We were one of only three families attending so it was an intimate gathering. I especially loved that one of the other attendees brought along her newest American Girl doll, Rebecca, who (according to her bio) is Jewish and attended Eldridge Street. The children were given binoculars and magnifying glasses and they scoured old photographs, and the synagogue for clues as to what life was like way back when. 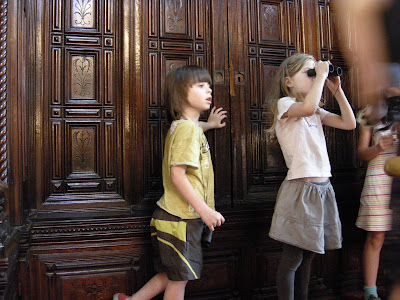 When our visit ended, we needed to have lunch. I had no set idea in mind as to where we would eat, having imagined that something like Katz's would have fit in perfectly with the mood. We began wandering but quickly switched gears when Izzy recalled his distaste for pastrami.
Instead we had the good fortune of stumbling upon An Choi.

An Choi is a small Banh Mi establishment on Orchard Street. I had read about this wonderful Vietnamese sandwich spot a few months ago and was more than pleased to give it a try. Leave it to me to want a roast pig sandwich after a visit to a synagogue but I simply couldn't resist. I chose the sandwich that boasted "chunks of moist Chinese roast pork belly and slivers of crispy skin". The crisp pickled carrots and cucumbers turned the sandwich into a symphony of textures and flavors. Izzy was not quite as taken as I was and proceeded to extract the skin from his half (which sadly was a tad more fatty than crunchy but tasty nonetheless). 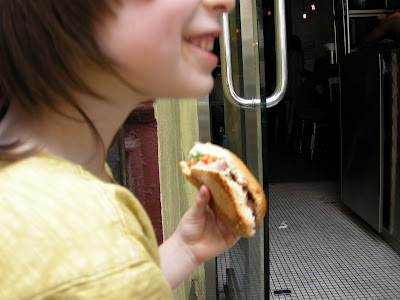 While eating our sandwiches on a bench out front, we spied Guss' Pickles only a few steps away. After lunch, we stopped in for another dose of the old Jewish Lower East Side. There was a food tour underway as we approached. 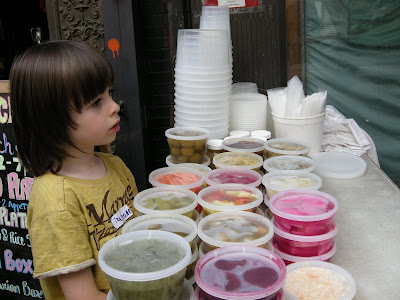 Izzy was captivated by the offerings and waited patiently for our turn. Quart of pickles in hand, we made our way onwards toward Il Laboratorio Del Gelato, another spur of the moment stop on what was turning into a veritable food bonanza! The milk chocolate is a must!

Bellies full, we pressed on to a playground. Izzy needed some playtime after all that eating and I needed to sit down. We made it to Thompkins Square Park just in time for Izzy to terrorize a few little kids at the water park and also find their Sunday Greenmarket in full swing, something to keep in mind if you need some farm fresh goods over the weekend. My cheese love, Consider Bardwell Farm was there and I managed to score a Mettowee. Yippee!!

But our day did not end there. Finally tuckered out, we hopped a cab over to the 9th Street Path only to discover the Gay Pride Parade marching along, in all its rainbowed splendor. Izzy insisted upon inching up for a better view and by the end he seriously coveted a rainbow flag. He was taken in by the music and colors, and we agreed to attend next year. Throngs of parade-goers packed the train on our way home and Izzy decided he would try to wipe a rainbow flag from one of them. I told him that might not be a good idea so he decided upon buying one at a toy store. I explained that we probably wouldn't find one there, that the West Village would be a more likely spot. 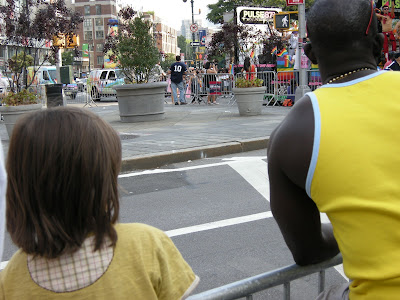 You are killing me with that sandwich description.

Rainbow flags for everybody!