Peanut Butter, Pickles and a Peach: A Full Lunchbox And An Empty Stomach (First Day of Camp Liberty) 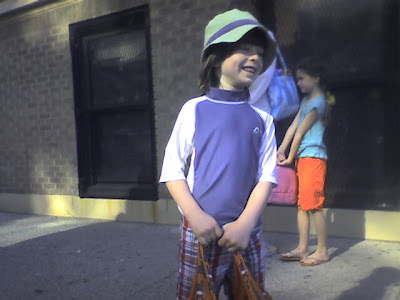 Many parents in Jersey City, eagerly await the day when their child turns six, for that is the age when they are old enough to attend Camp Liberty, a much loved day camp situated somewhere within Liberty State Park.

I can't say that I was nearly as eager as the others but I had heard many good things about the camp so I signed Izzy up. The first day of camp was a big day for Izzy in many ways. It was his first time taking a big, yellow school bus, which picked him up around the corner from our house. We waited for it to arrive, along with many of the neighborhood children. He barely gave me a backwards glance when it was his turn to get on and he waved as the bus pulled off.

I worried about him all day: Would he put on enough sunblock? Would he go swimming? Who would he play with? Would he use the bathroom? And most of all..Would he be hungry? You might think me foolish for worrying but as it turns out, my food fretting was for well-founded.

When Izzy descended from the bus he looked less than pleased. And for good reason.
He was quite hungry. I had packed him an ample lunch which included a peanut butter and jelly sandwich, 2 pickles and a giant white peach. I was told that they were not allowed to have a snack, which meant that he went from 8:15 until noon with nothing in his belly except for 2 blueberry pancakes and a glass of grapefruit juice. He complained that during the morning he was hungry and was told he had to wait until lunch. One needn't be a nutritionist to know that it is not healthy, for child or adult to go nearly four hours without a snack.

When lunchtime finally arrived, Izzy claimed there was not enough time to finish so he only ate 3/4 of his sandwich. Not only that but his peach met a sad fate as it had turned to mush. To add to his mood, he never used to wc the entire day. My poor boy. Is it any wonder he looked so unhappy? 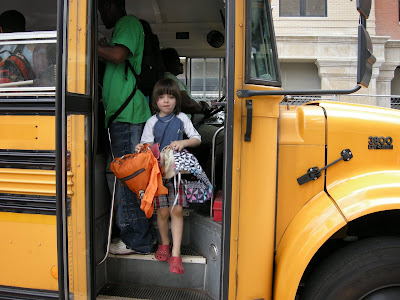 On the bright side, he returned full of many details of the day, the most positive surrounding art projects he had worked on. His pocket was full of pins that he had made and he proudly displayed them and then told of another project in the making.

If only he could snack and have more time for eating, his camp experience might improve. Let's see what tomorrow will bring.
Posted by Izzy's Mama at 6/29/2009 01:03:00 PM

I hate how they try to train kids so early in life to shovel in their food or go hungry. :-/

Amy: I just don't get it. They said that most kids just want to hurry back to play. Instead I wish they would encourage children to savor their food. Alas they only have 20 minutes for lunch.

I hate to break it to you, but most kids are more interested in going out to play than eating...its part of being a kid. Also, in most schools, kids routinely go from 8 to 12 without eating... its the time between the start of school and the lunch hour. The only time I didn't have that much time was in 6th grade, when I had lunch at 10:30 due to overcrowding...

As for time allotted to eating: I realize that in the upper grades students go for long stretches without eating but that is less likely to be the case for kindergarteners and lower elementary school children. At Izzy's school they have snack and same at the Lycee where I used to work.