The Plight Of Miss Fang (The Making Of A Feral Cat) 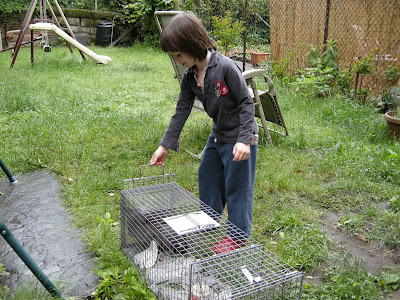 Unbeknownst to us, Miss Fang was born near our backyard in April of 2008. Her mother, (whose origins are uncertain) heretofore known as Mama, introduced her to us, along with her siblings last June, when she wandered into our yard searching for food. We had hopes of catching Miss Fang or her siblings but they dispersed before we had the chance.

When Miss Fang came our way, I felt compelled to take care of her, just as we had taken care of her mother (Mama) last year. History repeated itself in that Miss Fang brought her kittens to the very same spot where she was born, in our neighbor's yard.

We had spotted Miss Fang dash through our yard pregnant and then did not see her again until after she had birthed her kittens. She looked frightened and hungry. I immediately began to feed her and her kittens, knowing that I would somehow become responsible for them. With help I decided to trap the whole family. I wanted to get the kittens before they had a chance to disperse.

The heart-wrenching part of this is that I had to separate Miss Fang from her kittens. After we caught the kittens, we brought them upstairs. Miss Fang remained in her trap in the yard until her spay appointment on Wednesday. It was extremely difficult for me to listen to her whimper. I did my best to clean her trap and keep her comfortable but no matter, she was miserable, not eating at all and occasionally seeking a means of escape. The second night she was slightly calmer and nibbled a bit of food off of a butter knife. Listening to her was painful and I looked forward to having taken to be spayed the next morning.

N., of Critter Cab, came to get her and returned her that same afternoon. I kept her overnight, just to make sure she was okay. The following morning, Izzy released her and she immediately ran off to the spot where she had last seen her kittens. 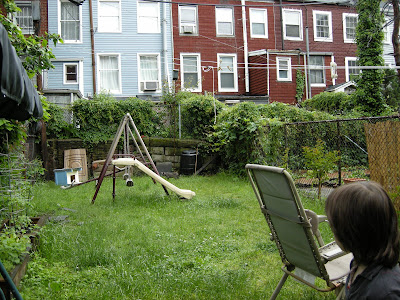 She sniffed around a bit and then I fed her and she disappeared. I worry about her well-being as ideally she should have 4-5 days to recover. She is certainly less sure-footed and has trouble climbing the wall in our yard. I have continued to feed her twice a day since then and we have spotted her curled up against a window in our neighbor's yard. She comes to eat but is definitely keeping her distance.

Is she better off now than she was before? In the short-term I would have to say not, as she is now missing her babies and recovering from surgery. Hopefully she will soon enjoy a calmer existence, chasing butterflies and birds in the backyard. Will she make our yard her home or will she leave for a yard free from hostile neighbors? It all remains to be seen.

What I do know is that I have saved our neighborhood from having adding seven female cats to its population, along with countless future litters.
Posted by Izzy's Mama at 6/05/2009 09:51:00 PM

I know alot of times I think I'd like to be an animal - pee, poop, eat, get petted.......but then the reality of animal life kinda hits me. Sucks.
You did a good thing, but still...sucks.

Amy: Miss Fang is pining at our back door now. Ugh!

Another kind soul in Jersey City taking care of the homeless. The local TNR initiative is great and they make it so easy to participate. What isn't, is being a foster family and eventually adopting them out. Ah, the bonding! A big thank you to anyone doing this!

D. I am trying not to bond too much. The fostering is actually fun, except for today's flea scare!