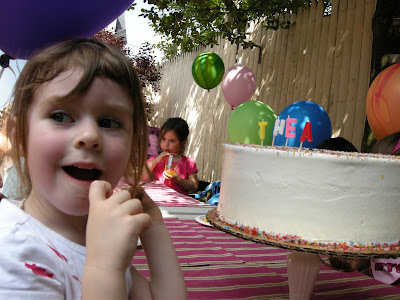 I am as charmed as ever by birthday parties held at home, as they are few and far between. T.'s fourth birthday is another shining example of how successful a small party at home can be.

The fun began with T-shirt painting. The kids were giving stencils, paints and crystals with which to embellish their shirts. Izzy, the oldest at the party, was engrossed in his artistry and could not be torn away from his oeuvre. 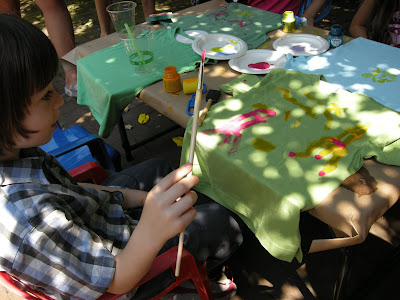 He did a great job but missed out on all of the groovy games led by N., a friend of the birthday girl's Mama. Pin-the-tail on the donkey, Freeze-Dance and Red-light, Green-light were all part of the fun.

Snacks were offered and Izzy was introduced to his first taste of Cheese Puffs or Doodles or some related snack..At least he gave equal time to grapes on his plate. 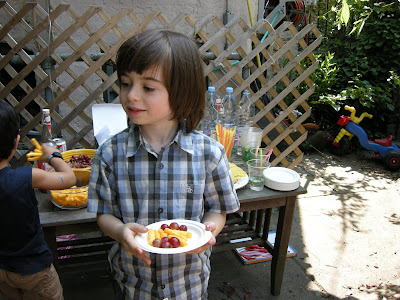 Next up was the cake, which was a real show stopper from my bakery obsession, Baked. Hard to imagine how eight children and their parents were supposed to eat such a thing though it was lovely to behold. 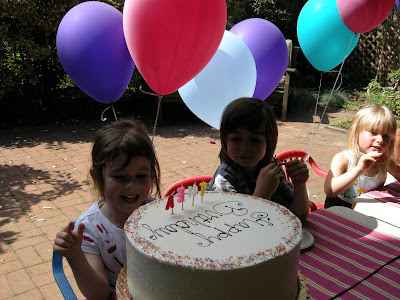 goodness gracious, that is a cake!

just say no to the cheese doodles, Izzy! ;-)

Amy: Quite a cake indeed. Even I can't say no to a cheese puff which is why I never by them..I have a thing for the organic ones!

Carla: I do like the idea of kid restaurant week. I read about it awhile ago but I guess I should blog about it too! And maybe even participate.