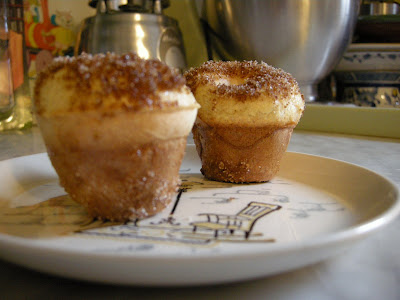 It was the night before the last day of my snack mom assignment last week. I was frazzled and couldn't bring myself to bake another thing. I had baked a few things for class already. Besides, far too much had been going on, from hosting two La Leche League meetings, baking cheesecake, and this whole cat saga, the last thing I felt like doing was making another snack. So I went to sleep, knowing I had nothing in the house to offer Izzy's class, hoping somehow that inspiration would strike in the morning.

Inspiration did strike and it came by way of David Lebovitz and his stunningly simple rendition of airy, sweet popovers or sugared puffs. 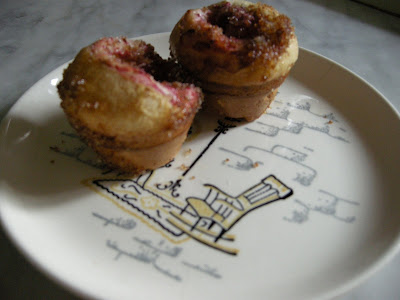 I tweaked the recipe in that I made miniatures. I was able to get 30 miniatures rather than 9 large. Enough to feed his class and experiment. I rolled the cooked puffs in a mixture of brown and white sugars. I experimented on a few and came up with a raspberry version, created by dropping a single raspberry into each batter-filled muffin tin.
Posted by Izzy's Mama at 6/05/2009 10:36:00 PM

*ahem* I have not eaten breakfast, so I'll be over momentarily. Shall I bring coffee?

Amy: Tea please! Seriously just make them. All you need is a blender!