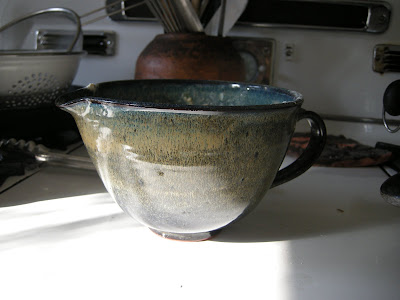 If ever there were a reason to rush off and make pancakes, this bowl is it. It is a "batter bowl" so named I gather, for its spout which makes for easy pouring. I have no idea if these are common but I only just happened upon them the other day, at my next door neighbor's house.

You see my next door neighbor, J. is a potter and quite an accomplished one at that. I knew of his profession but had seen only a few samples of his work in the backyard and I had not an inkling of what lay within. Last weekend I discovered that his yearly pottery event which I had always just thought was a private viewing, was actually a sale, open to those in the know. So Izzy and I made an appearance and it was there that I came upon this gorgeous bowl and two floors of extensive pottery offerings. You can check out more of his work here and next year try to make it to his sale. 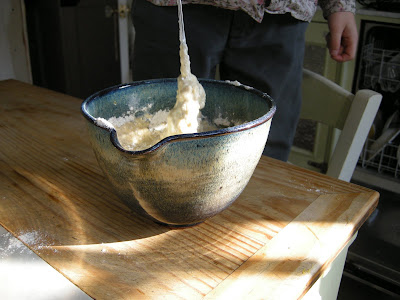 So inspired by our new bowl, the morning after its purchase, Izzy and I made some raspberry pancakes ( I just added frozen raspberries to the original recipe) and I was thrilled to be able to pour them straight from the bowl.
Posted by Izzy's Mama at 11/27/2009 10:50:00 PM

That is so beautiful! I used a sports bottle last time I made pancakes, and that was fun, but your new bowl is very elegant. Enjoy!

p.s. Did you know that for a while, your comment function wasn't fully working? I wanted to let you know that I was reading when your grandfather passed away, and am sorry for your loss. You, he, and Izzy had such a special relationship.

I've been using batter bowls for years and just love them. At one point I had two! We used to make pancakes every day, it makes the pouring part easy. Definitely one of my most used kitchen items.