A New Way Of Looking At Chicken: Head - On 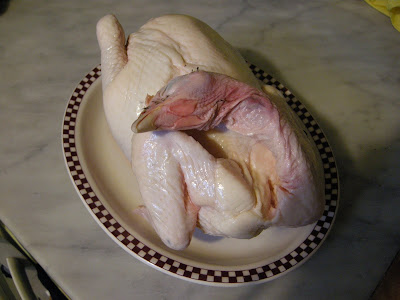 Our foray into local foodstuffs at the New Amsterdam Market, also led us to the Bo Bo Chicken vendor. I examined their fowl offerings and I was intrigued by the promise of a chicken with more dark meat, since that is what we all prefer.

The chicken came wrapped up inside a plastic bag, with its head tucked neatly on the side, enabling me to promptly forget about exactly what I was in for later. When the time came to cut open the bag and prepare the chicken for dinner, I called Izzy into the kitchen to partake of the experience.

As Izzy looked on, I carefully cut the plastic bag open with a pair of kitchen scissors, allowing the blood to drip down into the sink. Izzy took one look at the bird and pronounced it, "Dead as a dumpling" (not sure what that means but you get the idea). I was far more traumatized by the sight of the sleeping bird than he, yet still I pressed on with my task of preparing it for dinner.

Part of my discomfort in looking the bird square in the face is the fact that we are so unaccustomed to doing so. Izzy, on the other hand, hasn't seen enough dead chickens to have formed a clear opinion. In fact, for him the sight of headless chickens may be more upsetting. (Recently, he was so disturbed by a scene of dancing headless chickens in the abominable movie, Cloudy With A Chance of Meatballs, we had to walk out.)

Back to the chicken in question, I was faced with what to do with the head. I pondered cooking it with the head on, duck-style or simply cutting it off, which is what I ended up doing. I tossed it out, which was probably a mistake but I didn't have time to contemplate other ideas. I roasted the bird like this and we were pleased with the moist results.

Some might recoil in horror at the fact that I exposed Izzy to a chicken head but I would much prefer he recognizes a chicken as a chicken, rather than eat mysterious nuggets that masquerade as chicken. Food experiences such as this one, help him gain a greater understanding of what we eat and why.
Posted by Izzy's Mama at 11/01/2009 09:26:00 PM

I had to laugh a little.... A Christmas Story...the scene at the restaurant "It's SMILING at me!"

that is so gross!!