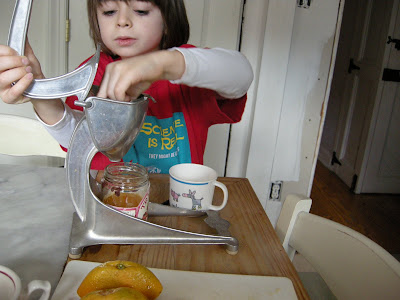 Are all Izzy needs to make his own orange juice in the morning. Well, that and a Wearever vintage juicer, courtesy of my stepmother, who gave it to me ages ago. 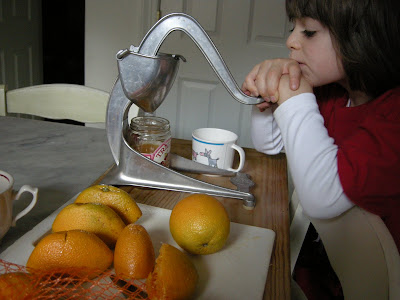 Time was, I drank orange juice every morning. As a child, I was given the orange juice that was made from concentrate and later on graduated to the pasteurized variety. I simply had to have orange juice every morning or my breakfast wasn't complete. I have since kicked that habit, often having grapefruit juice or just tea instead. Although Izzy doesn't drink juice throughout the day, I started him on the same morning juice habit and he now expects some kind of juice with his breakfast.

Lately though, I have be rethinking this morning juice habit. I can't drink it myself anymore, for health reasons. So I have decided to take a break from buying orange juice, as the pasteurized, vitamin-fortified variety is a poor substitute for the real thing. In fact, not only is the flavor less appealing, it has hidden ingredients. I would rather that Izzy have something fresher, but what?

Home-squeezed juice was the obvious answer. Izzy only needs two oranges for an adequate amount of juice and he squeezes it while I make his breakfast. He looks forward to doing it every morning and revels in the taste difference. 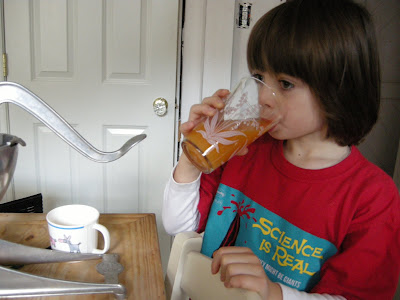 Now I just have to make sure to keep an ample supply of oranges in the house, which hasn't been as easy as I thought. First I bought a bag from Trader Joe's and they were perfect. Next we tried some navel oranges from Whole Foods (which I realize are not juicing oranges but that was all they had). The former produced a beautifully vibrant colored orange juice while the later produced a paler less intense juice. As orange season approaches, it should get easier to find good juicing oranges. If not, I'll be seeking an on-line source.
Posted by Izzy's Mama at 11/06/2009 11:03:00 PM

There's nothing like fresh orange juice! We had orange and graperfruit trees when we lived in Florida. We always prayed for a cold winter because the juice would be SO much sweeter...