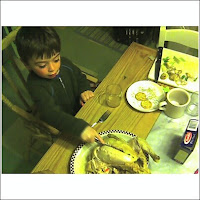 Though I do love my grandma's chicken soup dearly, I have become a devotee of Oliver's Chicken Stew. I discovered this recipe several years ago on the Food Network. Jody Adams, a chef, named it after her son and it provides a sneaky shortcut to chicken soup goodness when you need that fix in a hurry, which was the case yesterday.

When I am under the weather there is nothing like a bowl of chicken soup to send me on the road to recovery. And since Izzy was able to talk, he has asked for chicken soup too when he isn't feeling well. So I had no choice yesterday morning but to run out to ShopRite (yuck) and find an organic chicken and some veggies to go with it.
When I returned from my excursion I promised Izzy that after his nap he could help prepare the soup. I prepped the veggies and then later on he added them to the soup, stirring it while it simmered. His greatest wish though, was to assist in the cutting of the chicken. When I placed the steaming chicken, straight from the pot onto a plate, he dashed to the table, immediately wielding a knife. I explained that we needed to allow it to cool before removing the skin and tearing it to pieces. As he contemplated the fowl before him, the following conversation ensued (and not for the first time, I might add).

"Mama, what is chicken made of?"
"It is a chicken, an animal."
"Where does it come from?"
"Well, it is raised on a farm, hopefully humanely, allowed to roam around."
"And then what happens?"
"The farmer feeds it and takes care of it until it is a certain size. Then he sends it out to be killed so we can eat it."
"That's not very nice."
"Some people think that it isn't very nice to kill animals and eat them. They are vegetarians. But Mama and Papa believe that it is okay to eat animals if they are raised properly and given a decent life. We like to eat chicken. Do you?"
"Yes"
Then, right beside me, he set down to the business of removing the skin
and bones. He even stopped to nibble while he worked. I rewarded his efforts with a chicken oyster, something I rarely share.
Later on, I watched happily as he spooned up chunks of carrots and chicken, relishing every bite of the meal we had created together. Apparently, the provenance of the chicken plagued him no further...

1 3 ½ - to 4-pound chicken, rinsed
8 cups chicken stock
Salt and freshly ground black pepper
5 medium carrots, thickly sliced
4 medium leeks, tender white part only, thickly sliced
4 celery stalks, thickly sliced
4 cloves garlic, smashed
1 teaspoon chopped thyme
1 bay leaf
3 sprigs flat-leaf parsley
½ cup stellini (tiny star pasta)
3 tablespoons unsalted butter
1 tablespoon lemon juice
1 tablespoon chopped tarragon
¼ cup chopped flat-leaf parsley
6 slices toasted Italian bread
¼ cup extra-virgin olive oil
½ cup grated Parmesan cheese.
1. Place the chicken in a 6-quart pot breast side down. Add the stock, lightly seasoned with salt and pepper, and bring to a boil, skimming often. Add the carrots, leeks, celery, garlic, thyme, bay leaf and parsley and simmer. After 15 minutes, flip the chicken and cook for 25 minutes more. Remove the chicken and let cool.
2. Strain the vegetables, discarding the bay leaf and parsley. Return the stock to the pot; simmer until reduced by half. Pull the chicken meat off the bones. Add the pasta to the stock and cook for 3 minutes, then whisk in the butter, lemon juice, tarragon and parsley. Add the chicken and vegetables; heat through.
3. To serve, place a piece of toast in the bottom of each of 6 bowls, then drizzle with olive oil and sprinkle with Parmesan. Top with stew. Serves 6. Adapted from "In the Hands of a Chef," by Jody Adams and Ken Rivard.
Posted by Izzy's Mama at 3/14/2007 09:08:00 PM