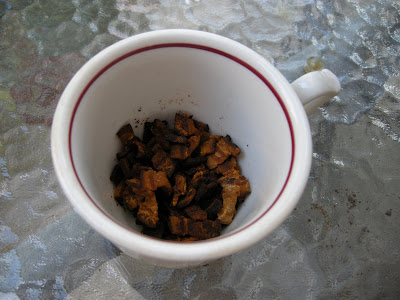 A. returned after a long trip. Izzy and I were eager to show off our new cat friends. I also had high hopes for a delicious dinner. Things didn't go exactly as planned...

Once out in the yard, A. made a bee-line to the kitten area. He picked up all five kittens, trying to acclimate them to eating on the grass instead of the back wall. His plan failed miserably and the cats mewled and needed to be placed back in their usual spot.

Meanwhile, the neighbor's dog made his presence known, barking incessantly for the second day in a row. Apparently, the scent of kittens (or their food) is making him crazed. The worst part is, the dog in question, belongs to the neighbor's friend, who visits her yard frequently. The neighbor's dog barks occasionally, whereas the friend's dog is unstoppable.

Yesterday's attempt to explain to these neighbors about feeding and trapping cats, clearly had no impact. When faced with barking dogs today, instead of calling off the dogs, the owners decided to go at the kittens with a broom, poking it and shaking it through the bramble where the kittens rest.

I was in the middle of cooking some minced bacon when I saw her go at the kittens a second time. I couldn't contain myself and left the bacon sizzling on the stove while I went over and explained that if she chased the kittens and mama cat away, the mama might move the litter and I would be unable to trap them. I asked if they could leave the kittens alone and that I would try to have them trapped in a few days. Izzy was watching this conversation, while at the same time, noting that our dinner was at risk.. He yelled out, "Mama, are you yakking or cooking?

It was then I remembered the bacon, which by this time had turned black. No matter, I thought. I was happy to have sacrificed the bacon for the kittens as the neighbor seemingly agreed to back off.

Turns out I burnt the bacon and ruined our dinner for naught. After I went back to my cooking (results less than satisfactory), I heard the barking yet again and watched as our neighbor continued to menace the kittens. Let's hope I get them soon. Kittens anyone??

Ugh...some people are just asses. I say you get a broom and poke your neighbor with it.