Mama is A Grandma: Miss Fang Comes to Town 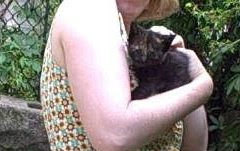 Right about this time last year, we made the acquantaince of Mama Cat. She introduced herself to us along with her 5 kittens, 4 of which were gray and white, the 5th, a darkish gray, bearing the greatest resemblance to her mother.

Despite our best efforts, the litter dispersed and Mama found herself in the family way shortly thereafter. None in the second litter survived and it was then we took in Mama and she is slowly but surely becoming accustomed to life indoors. But it doesn't end here.

Several weeks ago, Izzy and I spotted a rather pregnant-looking cat, who looked remarkably like Mama, in our yard. We realized it was Mama's daughter and we looked out for her but didn't see her again. Until last week, when she arrived in our yard, looking hungry and no-longer pregnant. She had the frantic appearance of a nursing Mama. We put out food her and waited to see.

Turns out she is hiding her litter of 4-5 blackish kittens with white and orange markings, in the same spot where she grew up. For the past 3 days she has been dining in our yard and her kittens are joining her. Miss Fang, so named for her unusually large teeth, is entirely feral yet she has not hissed when we come near. I have managed to pick up the kittens twice and pet them and hope to continue to socialize them for the next few days.

I am on a waiting list at Liberty Humane for a trap so this time I can get the entire family. For those of you who fear I am turning into this

You needn't worry. I will not keep them but instead TNR Miss Fang and adopt out the kittens through the local shelter. Who knows, we may even get to foster them first. Any takers?
Posted by Izzy's Mama at 5/24/2009 10:49:00 PM

awwwww.....I am a total sucker for cats! We can be Crazy Cat Ladies together.

Amy: Too bad you don't live around here..You could have one!