Post-Traumatic Pastrami: A Visit To Katz's 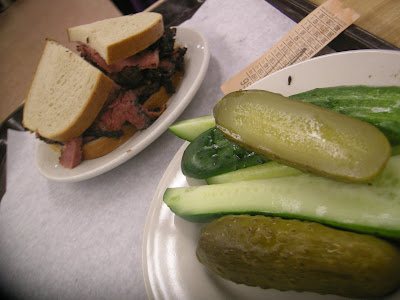 Having been raised on a weekly diet of pastrami, corned beef and other outrageously unhealthy Jewish deli-matter, how did it come to be that Izzy, now four and a half, had yet to eat pastrami until yesterday? Pig's foot before pastrami, how on earth did I allow that to happen? My grandmother would be appalled.

In retrospect, it all makes sense. Having long been a pastrami fanatic, I gradually kicked the habit as I got older and realized how truly unhealthy it was. I began to notice that although the taste sensation was terrific, the aftermath was less than stellar. I would be thirsty and lethargic afterwards, vowing not to eat it again. I was still lured by occasional cravings which diminished over time. Now if I eat it once a year, that seems quite sufficient.

My recent pastrami hankering was fueled by the news that the famed Second Avenue Deli was reopening. Then I was tempted by a shiksa who photographed this and the craving had to be sated. So when the afternoon found us on the Lower East Side for hair-related activities, just a hop, skip and a jump from Katz's, I realized the time had come, to satisfy my craving and begin Izzy's initiation into the world of pastrami.

So I found myself on a mission, dragging my child along Houston Street on one of the darkest days of the year. We came upon Yonah Schimmel's first, where I decided to pick up a knish or two, continue on to Katz's, get take-out and bring everything home to eat.

But no, by the time we arrived at Katz's, Izzy was already entering the "hungry zone". There was no way I could make it home happily if we didn't eat then. So I waited on line for my hand cut pastrami and ordered a pastrami on rye to stay. The hunk of meat that the cutter forked out onto the cutting board was blacked with spices and looked succulent. Izzy sat down patiently, while I peered over the counter, eyeing our feast to come.

I placed the plate in between Izzy and me and prepared to indulge. Izzy immediately dove for the pickles, while I took a bite of the bulging sandwich. I explained to him that we would be sharing the sandwich yet when I offered him bites he only took dainty nibbles. I broke a piece off and placed it beside him. It remained untouched. Meanwhile he continued to eat his pickles. 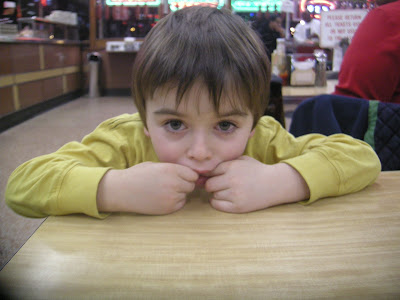 Something was clearly amiss, as he hadn't snacked much during the afternoon and was certainly hungry. I suggested he eat some of the sandwich and he shook his head no. I had no inkling as to what was wrong so imagine my shock when he said, "The meat is too salty. I don't really like it."

Somehow I was crushed, having raised my boy to eat nearly everything save one of the major food groups of my youth. Not only that, but the boy was still hungry and it was late. I promised him we would hurry home and have the knishes. It was a long ride home and we were both thoroughly exhausted. Thankfully he managed to eat half a knish and go straight to bed.

I suppose I should be grateful that Izzy did not swoon over pastrami, given the heriditary heart problems in my family, it is one food he doesn't need to eat. On the other hand, do I dare introduce him to The Second Avenue Deli? How can I avoid it? Next time we will order the corned-beef.

Too salty? Is there such a thing? Well, you know pastrami is not my thing but I'll indulge in excess sweets any day. Then, of course, I need to lie down and take a sugar coma nap.

My hubby is OVERJOYED about the reopening of the 2nd ave deli. Look forward to hearing about the corned beef from you and Izzy.