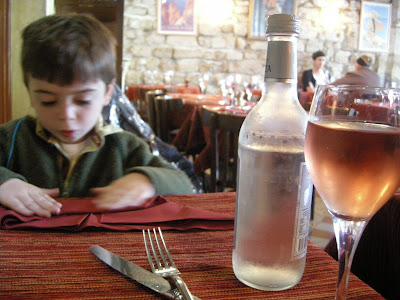 It is said that France is the land of great food...and Paris has no end of wonderful restaurants..yet how many children actually eat in those restaurants? And if they eat there, what do they eat? After today's episode I have to wonder.

Izzy and I, after having spent a rainy morning indoors, were ready for a lunch adventure. I left the apartment with a few places in mind. We peeked into the windows of the first two choices and Izzy, for some odd reason, turned them down. The last place I had in mind was called Alivi, a Corsican restaurant in the 4eme. I liked the sound of it because it was French yet a bit unusual. The menu outside looking interested so I peered in the window and it didn't look that busy. This was it so we pushed open the door.
The hostess arrived immediately, and I asked for a table for two. She looked down at Izzy, then back at me and said, "Si vous cherchez le steak hachee pour le petit, nous n'avons pas cela ici" (Basically, if you are looking for hamburgers for your son, you have come to the wrong place.) I looked her straight in the eye, smiled and replied..Il ne mange pas ca. Il mange le lapin. (He doesn't eat that, he eats rabbit). Which in fact he had asked for when we looked at the menu posted outside. This seemed to convince her and she ushered us in. The place was barely half full, how could she be so choosy?
Once seated, she presented me with the menu. The plats du jour, served with appetizer or dessert (which were really the only affordable items) were Lotte au Pesto or Pied de Cochon. Izzy insisted on the Pied de Cochon so I had the Lotte. I would get a salad to start, and Izzy would have dessert. 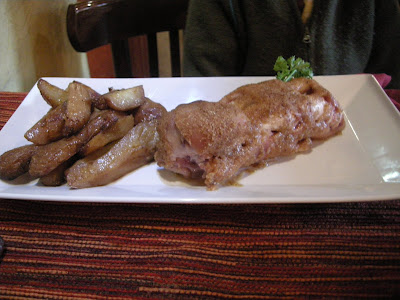 Now I have never eaten pig's feet before and neither has Izzy so this was sure to be interesting for us both. When it arrived, along with my salad it was a bit of a surprise. There it sat, a hoof on a plate, practically unadorned, accompanied only by some potatoes in the same shade of light brown. I busied myself cutting it for Izzy, discovering that it was quite bony, hiding but a few meaty tidbits. Is one supposed to eat the fatty stuff? As I removed the little bits, I piled the bones in a corner of Izzy's plate. I felt sorry for him because the tidbits were tasty but not nearly enough to make a meal of.

I thought he would share my food but he didn't seem that interested in my salade aux lardons (which was heavy on the deliciously chewy lardons). Then I assumed that when my bass arrived he would have some of that. Instead, when they served my fish, they served his dessert which made no sense to me but it was too late. He did take a bite of the fish but with two slices of a rich chocolate ganache cake in front of him, it was too hard to concentrate on the fish.
In any event, the hostess kept eyeing Izzy throughout the entire meal, at first with suspicion and then eventually she softened up. As we were finishing up our meal she came over to gush. She said he was so sweet and that he was a rarity..she explained that the reason she had forewarned us at the door was that many people bring in their children expecting "kid" food.
Izzy won her over, not only because he ate his "Pied de Cochon" but because he truly was a stellar lunch companion. We played addition and subtraction games with the wine glasses and geometry games with the napkins. He was sufficiently entertained before the meal and the meal was entertainment in and of itself.
Yet how can it be that here in Paris, restaurants aren't more accustomed to kids eating what their parents eat? Or maybe they are accustomed to that, just not AMERICAN ones.. After all, part of the reason I believe that kids should eat what their parents eat was born out of teaching French children. They always had lunchboxes full of things that American children rarely eat.
Posted by Izzy's Mama at 7/10/2007 03:43:00 PM

A great post! Just found you through Ann's "Granny Cart." Izzy sounds like a great kid and wonderful dining companion.

We too subscribed to the kids eat what their parents eat approach when our girls were little [and it paid off in them becoming adventurous eaters as they grew]. But on occasion we caved. I remember studying a menu in a New Orleans restaurant window once. It sounded lovely, but there was nothing on it the kids, then two and six, would have eaten. We were ready to move on when the fellow having a smoke on the curb spoke up, asking if we were looking for a place for dinner. When we explained the problem, he said, "I'll tell you what. I'm the chef. You tell your waiter what you want your babies to eat, and I'll fix it for them." And he did, beautifully. No hamburgers or chicken nuggets, just good, simple food--and a memorable evening for all.

Terry:
I wish a chef would prepare anything Izzy wants..the only one I know who does that is me!

it is not acceptable for children to eat in restaurants, ca se fait pas, especially nice ones. bistros are ok, sometimes.

Elizabeth: Why isn't it acceptable..The French are so vieux jeu..kids should be seen and not heard?

Sarah: Who knows..I had no idea it would be that way!