Five: From Fashion To Flowers 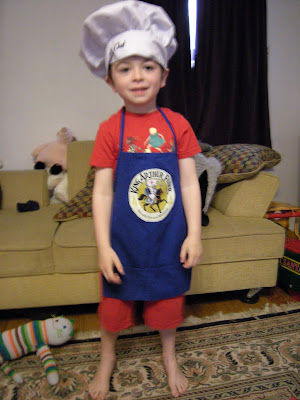 April 19, 2008 and Izzy turned FIVE. The is a greater milestone than I could possibly have imagined. For the past two months many conversations have included the following:

When the big day arrived it was dwarfed slightly by the whole Passover thing but we did manage a candle in a macaroon and gifts from friends.

The day after the big birthday we had more to celebrate. We went to Town Hall to see Izzy's most favorite band, They Might Be Giants. We had fantastic seats and A. and I were perhaps even more enthralled than Izzy, who sat mesmerized, at the edge of his seat for nearly the entire concert. This was followed by a whirl on the Bryant Park Carousel and then back home for seder, take two.

Fashion which seems to be a recent interest, was in evidence on his first school day after turning five. He emerged from his room that morning dressed in red shorts, a red t-shirt and a blue apron. He added his chef's hat and was ready for school. I had no problem with the outfit though worried that the hat might cause an uproar at school. And it did. His teacher, Miss V., promptly suggested that he take it off and reserve it for circle time or that I take it home. Neither was the right choice and Izzy pouted and cried in my arms for a few minutes and then relinquished the hat. The apron did remain on him the entire day.

Five seems to also coincide with a current obsession with flowers. Some of which should be left where they belong and not plucked from public areas others of which need to be left for everyone to enjoy. At least it was okay to pick a bouquet of these flowers. Arranging them was also fun. 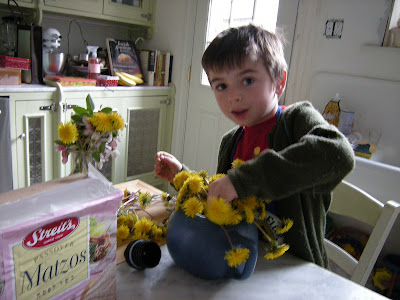