Each week, I check to see what unusual offerings Upper Meadows Farm has on hand at the Hamilton Park Farmers' Market. Last week I came upon some tiny dark berries which they called "Black Caps" and sold for $7 per pint. The vendor urged me to sample one and told me they were wild picked. I bought the last one, with a slight suspicion that somehow I had been hoodwinked.

I was dead wrong. These were as tasty as the berries I used to pick from an errant bush in my childhood suburbia. A fleeting taste of summers past. 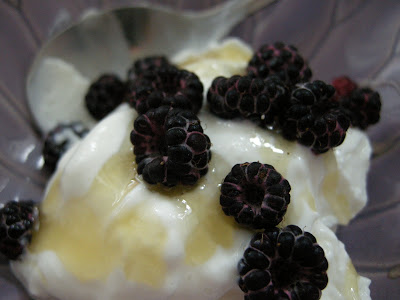 The berries, which turned out to be black raspberries, remained fresh for nearly a week. I doled them out judiciously, as daily embellishments to my yogurt. I was sad when we nibbled the last ones, and ever hopeful for today's market.