If You Just Flew In From Rome...

What would you want for dinner? A big bowl of greasy Chinese food or this? 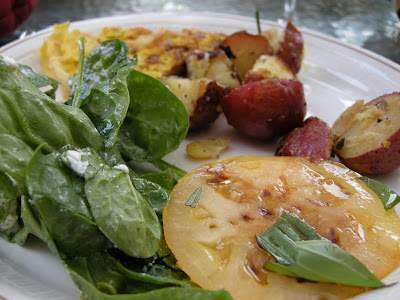 My husband, just off the plane from Rome, texted me to say that he had a hankering for a big bowl of greasy Chinese food. Meanwhile, I had planned
this: Tortilla Espanol, Spinach salad with goat cheese, Sliced Yellow Tomatoes With Olive Oil and Balsamic Vinegar and New Potatoes Sauteed with Rosemary.

Should there really be a contest? I was worried for a moment there that he'd make the wrong choice. Thankfully he came to his senses and I ended up cooking and he ended up wolfing down several portions of everything. Apparently he has no time to eat while working and traveling. He was making up for days of minimal eating and believe me, he doesn't need to diet.

I guess you are not very familiar with Chinese food. They are definitely not all greasy! Have you really seen fat chinese people around? I doubt it. take a trip to Canal street , NYC and look around you, the older people may look healthier than most other non-chinese. This is definitely a better reflection on our cuisine. Besides, what you get from the usual chinese resturant are not typical food that we eat.Have you ever ask for a menu that is specially for the chinese or at least ask the waiter a dish that a chinese would order and not a non chinese? There is usually one if that resturant is an authentic Chinese resturant.Try it for yourself and you will know how little most people know of chinese food! Sadly but true. So please do not make sweeping statement on other's cuisine if you are not familiar with!

I can understand where you're coming from because so many people make uninformed generalizations about Chinese food based on their favorite neighborhood Americanized Chinese food restaurant, which is hardly Chinese in the first place.

However, your response to this post was uninformed as well. If you happen to just search the word "chinese" on this blog, you will find many posts in which the author writes fondly about some great traditional Chinese restaurants and dishes.

The author never has nor never will make a negative generalization about any culture's cuisine. Her husband was simply stating he wanted some "greasy Chinese food." Every culture has some dishes that could be considered greasy, whether it's Chinese roast duck, Filipino lumpia, or French frites.

In addition, writing an annoyed response to a blog post without leaving one's name is disrespectful. It bears no credibility and it doesn't give the author a chance to e-mail you or possibly even get some restaurant recommendations for what you feel is good Chinese food.

Anonymous: Joeseph pretty much summed it up for me but if you were a regular reader of my blog, you would have discovered that I am a great fan of Chinese cuisine. I realize that most of what one finds in this country is Americanized Chinese food but I have had the chance to dine in more authentic restaurants and I am always pleased! My husband, on the other hand, enjoys "greasy" Chinese food which I would rather not eat if I can avoid it. In fact, whenever he wants Chinese food, we argue because I would rather eat the authentic variety and he just wants oily sesame chicken.

Joseph: Thanks for doing my work for me! I couldn't have said it better myself.

NTSC: Thanks for your support!