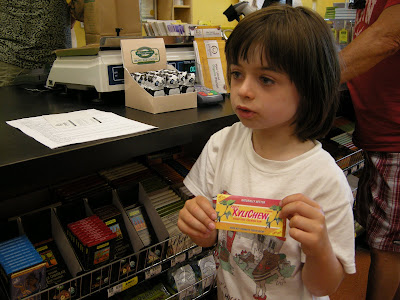 I'll admit, I was a chewing gum fiend. Rarely without a piece in my mouth, I praticed chomping, cracking and bubble blowing as if they were my occupation. My friends and I planned trips to the Cottage Inn just for pieces of individually wrapped Bazooka Bubble Gum ( as much for the gum as for the collectible comics inside). My grandma and first stepmonster S. bought me endless packs of Trident Sugarless and my grandfather constantly told me I looked like a cow, chewing "cow gummy ".

Gum chewer that I may have been, I have long kicked the habit and hoped to keep Izzy gum-free for as long as possible. He had led a gum-free existence thus far, reaching the age of nearly six and a half, without any gum at all. Occasionally he has remarked that his friends are allowed to chew (some quite often at that! ) but never made a fuss over not having any. Then we read Charlie and The Chocolate Factory and gum appeared ever more prominently on his radar. What it is that appeals about the gum cracking Violet Beauregarde it is hard to say but I too longed to chew one piece of gum for a record-breaking number of days and Izzy has fallen under the same spell.

He has been pestering me for gum ever since we saw the film and I mistakenly promised him some from a health food store. I managed to stall for a few weeks but we finally found ourselves at one today, Pangea Naturals in Manahawkin, the only health food store in close proximity to Long Beach Island. There I bought him some type of fruity gum with Xylitol, which I didn't know much about. I had heard that it actually helped prevent cavities but apparently the evidence to support that claim is rather scant. Not only that but Xylitol is not the miracle sweetener I had imagined, but rather an industrially produced sugar substitute that may cause diarrhea.

Izzy popped that gum into his mouth and was instantly smitten. He relished every chew, marveling over the novel experience. 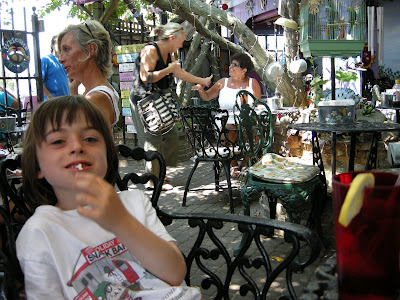 Izzy may be stuck on gum but I don't intend to allow him to chew it on a regular basis. The question is: Which gum should he be chewing? It comes down to deciding which is the lesser of two evils, artificially sweetened gums that don't cause tooth decay but may ultimately cause something else, or natural gums made with cane sugar which will rot his teeth. At the moment I am leaning toward Glee Gum.
Posted by Izzy's Mama at 8/18/2009 09:36:00 PM

The smell of grape Bubble Yum is one I will never forget. :) It just reminds me of younger days...