A Jeweler, A Diner, A Butcher, and A Chocolatier..A Trip To Williamsburg 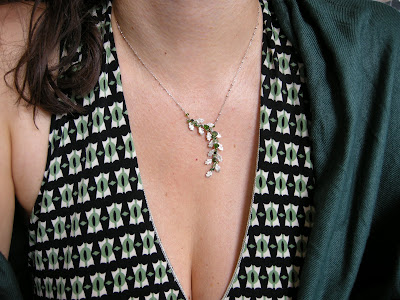 We hadn't been to Williamsburg since my usual partner in Brooklyn adventures (S.) up and left us for Portland. My friend Y. (a jewelry designer) came to the rescue, as she too is often up for food adventures, especially those of the meaty kind. There she is above, displaying one of her latest creations. 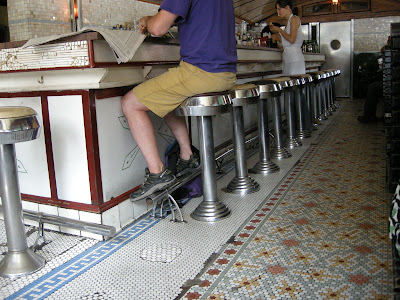 Our first stop was Diner, housed in a relic of the past, replete with tiny floor tiles, counter stools and creaky wooden booths. The menu was small and to the point. Y. and I zeroed in on the two meaty selections, a grass fed beef burger which she ordered and a sandwich of house-made pastrami, which was calling me. Izzy had his eye on the mussels. My sandwich arrived with a slab of pastrami (instead of the usual slices), some gorgeously addictive fries and tasty red slaw. It was pleasantly chewy and not as salty as the New York Deli variety, which I admit to preferring. Izzy delivered the simplest comparison. "Much less salty, I like it better. I HATE Katz's pastrami."

Meanwhile, Izzy's mussels arrived and when he went to eat one, he noticed that a seafood fork was lacking. When we asked about this, he was told to use a mussel shell to extract the critter from the other shells. He must have looked crestfallen because someone (not our waitress), graciously went off and found one for him from their establishment next door. He was finally able to tuck into his meal but after stuffing in too many fries, was unable to finish.

Appetites sated, we left Diner and made our way to their butcher shop, Marlow and Daughters, just up the block. If only a butcher shop like this existed in Jersey City. Slabs of beautiful cuts of organic beef graced their enclosed glass case, along with sausages, cured meats and a hearty looking house made pate, which looked more inviting then some pates found in Paris.

We both brought home a few well-chosen items, including house-cured pancetta, chorizo and the irresistible pate. The store not only carries meats but a wide array of other locally sourced products, including cheeses and dried beans. Later on, Izzy and I dined at the pate and wished that we had more for later. If Y. is equally smitten we may just find our way back there before long.

Our next stop was Mast Brothers Chocolate, for no foray into Williamsburg would be complete without a visit there.

Our final destination was Brooklyn Kitchen but I will reserve discussion until I receive a personal tour from my dear sister upon our next visit.

Back in the car, during the trip home, Izzy reflected upon the day...From the backseat I hear Izzy say smilingly, "Mama, what does it mean to butcher the English language?" Which I knew was a phrase he had heard on a Word Girl video. And so he came to terms with one of his first homonyms. Worth the trip for that alone!
Posted by Izzy's Mama at 8/25/2009 10:12:00 PM