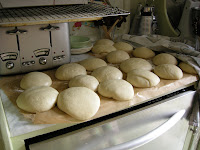 When I got up on Saturday morning, I had only three hours to prepare for the guests, who were arriving at 11:00 a.m...I was unable to finish up the night before because Izzy was cranky and kept calling me to soothe him.
Besides, there are always things that must be done right before the party.

One of the first things I needed to do was remove pizza dough (made two days ago) from fridge and allow to rise. Then on to prepare the vegetable platter, hull the strawberries, cut the mozzarella, and prepare a zillion other little things that all should have been done in advance.

While working, I peered over at the 24 balls of smooth dough rising on the counter. It was then that I had an inkling that things might work out. Somehow I had faith in this pizza dough. After all, I had never even tested it before making the four batches for the party. I just trusted the source, 101 Cookbooks.

Thankfully, by party time, almost everything was done (thanks to M. who helped me out) except table set up. The party boy was in his chef's garb and guests started trickling in. By 11:30, we started rolling! It would have been chaos, but friends helped out and somehow, every child was ready, with apron on, to get started. They each had a ball of dough, on parchment paper and a rolling pin. I didn't even have time for a demonstration. The dough was so pliable that they all managed to get it rolled out while I wandered around and offered assistance as needed.

Then I came around with sauce - surprisingly there was only one white pizza in the crowd. After that, the various toppings were passed around. Fascinating to see the variations, from the ultra plain..sauce and tons of cheese, to pizzas topped with the "works" (yay, I.!)

The hairiest part of the whole process was the interminable wait for the pizzas to bake. I only had room in my oven for four pizzas at a time so they were made in three shifts for the kids, who by that time were quite ravenous. Only after the children had been fed did the grown-ups even begin making their pizzas..how to deal with that lull next time..hmmm. At least the kids were able to run amuck in the yard.

Then there were the inevitable squeals for dessert from the kids who had already finished their pizzas first. So I relented and handed out the gingerbread men on sticks (I didn't actually use this recipe, just the stick part) to stave off the dessert demons. Funny thing, I thought the cookies were awful. I am not a gingerbread cookie person, have never made them before and I was convinced they were all wrong. I was shocked to see that the kids ate them. Izzy gave them the thumbs up. I used a recipe from an old cookie book I have but I won't give it to you because it really wasn't tasty. I will continue to look for a better one..Perhaps I should have used the stick one..but I digress...

After all of the children were served, we started on the grown-up pizzas, I took orders and made some, others came up and prepared their own. Of course the hankering for dessert continued so those gingerbread cookies turned out to be the interim dessert. When it was finally time for Happy Birthday, I brought out the cannoli, filled minutes before and the berries with purple whipped cream. Izzy blew out his candle and I could finally slump down, exhausted from the entire experience.

When all is said and done, preparing a pizza-cook-along for four year-olds was fun but it was no small feat. The words of one of I's, classmates rang in my ears.. As I was off with Izzy to prepare for the party one day last week, she asked where we were going. I said we needed to get some things for the party. She said, "Why? The party isn't now. We didn't have to do anything for my party. All we had to do was show up." Would that be food or lack thereof, for thought...
Posted by Izzy's Mama at 4/29/2007 09:01:00 PM

You are a woman amongst women for pulling that off! What a fun party! I'm glad the kids and Izzy were happy (happy birthday to him from another taurus!)

The pizza-making made such an impression on Anthony. He asked to make another pizza the very next day. So, with roller in hand and apron tied on, we did! And it was yummy too. Thanks for the party and the great idea for a delicious activity.

Ann: I know nothing about signs, is April 19th Taurus?

Anthony and Margot's Mom: I am so glad to hear that! I love to inspire cooking. We should have a cooking playdate soon.

Didn't know it was Izzie's birthday, but loved to read about it.

Anytime. You could teach me a thing or two, too!