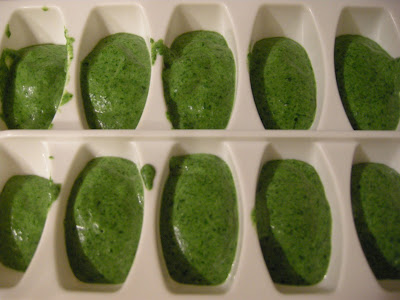 Yes. I have taken to preparing baby food for my grandfather and I am thrilled. I loved preparing it for Izzy so who better for the job.

The truth is that my grandfather has very few teeth. As a matter of fact, at last count we heard there was just one remaining. We discovered he was in need of iron (something babies often lack as well). He hadn't been eating enough greens. How could he with no teeth? I then realized that baby food was the answer so I started by preparing some creamed spinach puree, inspired by the Baby Bistro Cookbook

Puree of Creamed Baby Spinach (for babies and oldsters)

1. Heat oil in large pan over low heat. Gently cook garlic until lightly browned. Turn up heat to medium, add spinach and toss. Cook only a few minutes, until wilted and bright green. Remove to a plate and let cool.

2. In same pan, melt butter over medium heat. Reduce to low, add the flour and cook, stirring constantly for two minutes or until mixture is bubbly. Stir in milk slowly and whisk constantly, for five minutes until mixture thickens. Return spinach to pan, stir and season with salt, pepper and a scraping of nutmeg.

3. Allow to cool and puree in a blender. Spoon into ice cube trays and freeze. Remove the next day and store in plastic baggies or containers.