Chickpea-Tomato Soup: To Warm Us During Cold, Scary Times 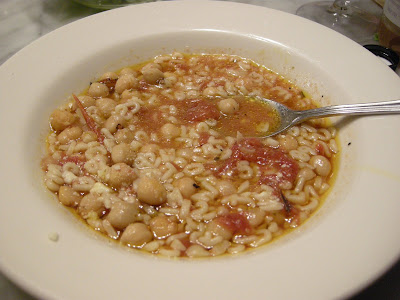 We can all do without the bitter cold days of late and the tragic event which unfolded in our very own neighborhood. Makes me want to shut the doors and not emerge until spring. Thankfully Izzy was shielded from the days events, having remained safe and warm in his school.

At home, I chose to get a ride instead of walk to see friends, somewhat freaked out that such horrible things were occurring so close to home. I picked Izzy up from school and we stayed in all afternoon, building long train tracks, reading stories and doing a fun experiment.

As the afternoon waned, I decided soup was what we needed and found everything I needed in the cupboard, including dried rosemary from our garden to canned chickpeas (great to have around for so many uses). 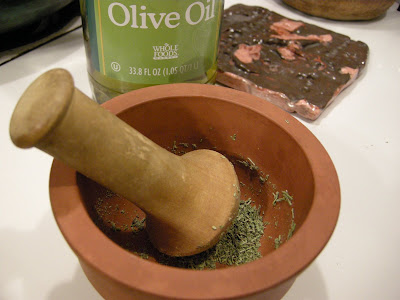 While I was grinding the rosemary in the mortar and pestle, Izzy was puttering about in the living room. All of a sudden he let out a shriek to end all shrieks and was hopping up and down clutching his hand. He was crying and screaming so that I couldn't surmise what was wrong. I thought that the cat had bitten his finger and looked around for evidence, all the while asking what was wrong. Eventually I heard the words "staple" and "finger". He continued his shrieking, finally letting me see the staple sticking out of his thumb. I yanked it out and blood spurted out, more than one would imagine from such a small spot. A band aid and many hugs later and he was cured.

Back to my soup...The recipe is forgiving and flexible..

1. Saute garlic cloves in olive oil until light golden. Add rosemary then tomatoes. Simmer for 20-25 minutes.
2. Add chickpeas and cook for 10 minutes.
3. Add broth and bring to a boil.
4. Add pasta and simmer until done. Add salt, pepper and water to suit taste. This can be thick and stewy or thinner and soupy.
5. Serve with grated cheese on top.
Posted by Izzy's Mama at 1/27/2009 11:13:00 PM

Thanks for the recipe. Sounds terrific!

A little recommendation, I found these to be so delicious and useful in my kitchen: http://bajoseasonedsalts.com/

we made this tonight. with veggie broth, of course. seriously, i'm in love. soooo goood.

John: Will check it out.

Jess: So glad you liked it. I used porcini mushroom broth. So easy, right?