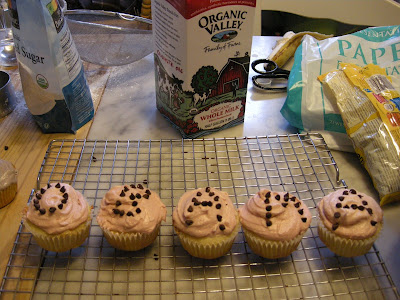 It dawned on me Sunday that I had no plan for this historic occasion. Going to D.C. was never an option as standing around in the cold never appeals. I still wanted to do something to celebrate, something closer to home.

I came up with attending the event held at the Eldridge Street Synagogue on the Lower East Side. I told Izzy that he could miss school and get to see Obama on a giant screen. I think it was more the screen than Obama that called to him but he agreed. It wasn't until Monday when he had had enough of weekending with me, that he changed his mind. He said he did not want to miss school.

I was sad because even though he might not realize the magnitude of the inauguration now, he would one day hold the memory of what he had been doing today. It then occurred to me to find out what they would be doing at his school. When the reply came in that they would not be watching it, I was upset but unsure as to what to do next. Thankfully, at school drop-off this morning, other parents expressed an interest in having their children witness the ceremony. The parents spoke and the school listened.

I received a call this morning, asking if I would host a group of children at my house. Montessori has a no t.v. policy but as a field trip it could be allowed. I was thrilled to oblige and began to eagerly set up the viewing area. Now I don't have a t.v. either but I do have a computer, which I attached to a large screen. When all was done, nearing to 11:15, my livestream CNN stopped working. It seemed stuck and I feared the children would arrive to see NOTHING. Panicked, I called my friend H. who saved the day.

Instead of coming to my house, I traipsed with 16 children and 3 teachers over to H's, arriving just in time to catch Joe Biden being sworn in. The older children were able to remain relatively calm and attentive for a good 20 -30 minutes but the others were fairly antsy. It was hard for most of us to stifle a giggle when H.'s youngest daughter wandered in front of the t.v., sans undies, but somehow decorum was maintained. Overall, I was thrilled that I was able to watch with Izzy.

After school, I invited his friend T. over and then realized we needed an appropriate snack. I whipped up some last minute OBAMA cupcakes which would probably have been better had I planned them in advance. The kids played in the snow happily and the day ended ordinarily. Will Izzy remember it....Only time will tell.
Posted by Izzy's Mama at 1/20/2009 10:15:00 PM