Rethinking The After School Snack: Grapefruit 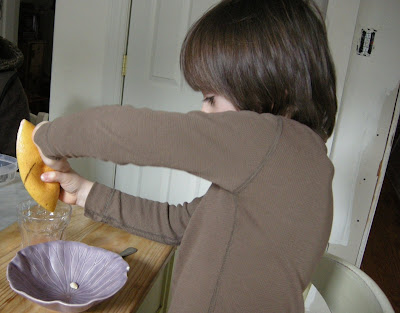 Milk and cookies are a classic after school snack and certainly good on occasion but better to make them a treat rather than a daily habit. Instead look to fruits, yogurt and nuts to provide afternoon sustenance.

Of late, Izzy's snack of choice has been red grapefruit, cut in half and spooned out of its skin. His favorite part of eating the grapefruit is what happens immediately after he has finished eating it. He asks for a glass in which to squeeze the remaining juice.

His friend J. came over today after school and I offered him a half a grapefruit as well. He claimed he had never eaten one before but was more than willingly to give it a try. He seemed delighted with the fruit, spooning it up rather quickly, eager to squeeze the fresh juice into a glass. 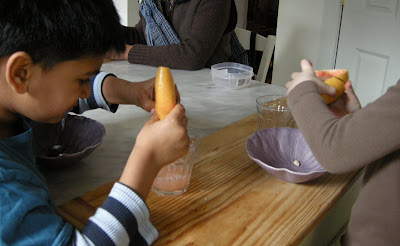 When I was pregnant (with L.) I ate them by the bushel, esp. because at some point my stomach turned at drinking water (?) and obviously needed the hydration. A pretty decent craving, when all was said and done.