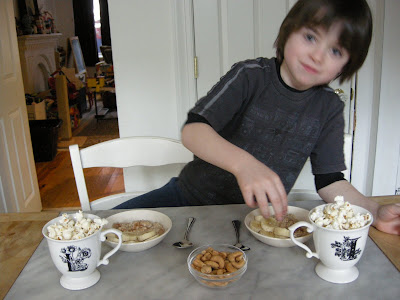 Izzy couldn't wait until his friend arrived, before nibbling on his snack. The pudding (yet again) is still in the experimental stages. I simply made vanilla pudding and substituted 2/3 of a cup of soy for 2/3 of a cup of half and half. The texture resembles rice pudding a bit and if you use white sugar and sprinkle cinnamon on top, you might fool someone. In this version I used brown sugar so it looked a bit like oatmeal.

The pudding was definitely a hit with Izzy and although his friend didn't eat the whole thing, he asked his mom if she would make some for him.
Posted by Izzy's Mama at 3/27/2009 01:48:00 PM