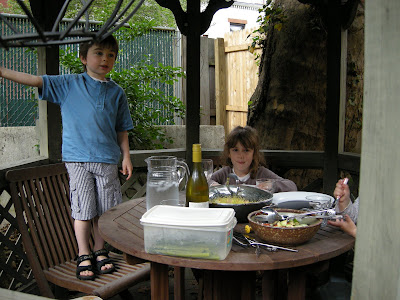 Doesn't that sound romantic? The sad thing is, it could have been my gazebo. You see, when we first started looking for a place in Jersey City, I had a magnetic attraction to an adorably thin house with an incredible garden. We toured the house on at least three occasions and even put in a low bid on it, only to be rebuffed by the owners. So we continued our search and ended up in a larger house around the corner, with a less romantic, albeit more spacious, backyard.

Then a couple of years later, I met the owners of 'my house" (the romantic one) and we became friends. And even though we have been friends for about three years now, I only just had the opportunity to dine in the gazebo, one of the things that made their backyard so charming.

Once again I had the fine opportunity to be schooled in all things British, this time sampling something called Kedgeree, which is a dish featuring fish, rice and curry powder. 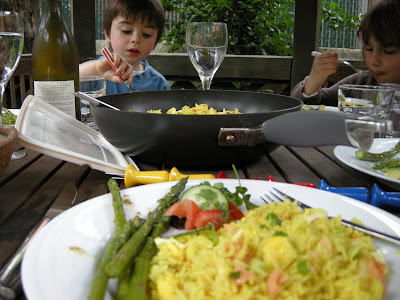 It looked and smelled wonderful despite H.'s claims that it was not her best attempt at this dish. And I might add that not a morsel remained on the serving plate, a testimony to its deliciousness. I will be attempting this recipe shortly and will post the recipe then.