Macaroni And Cheese: Why Didn't It Please? 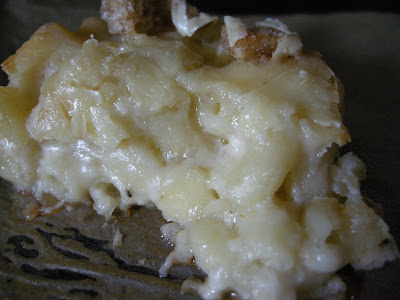 How did Martha lead me astray? I always look to her when I am seeking a classic version of a recipe so when the folks over at one of my favorite food websites recommended her Mac and cheese recipe as the absolute best I was itching to try it. And who better to make a large quantity of mac and cheese for but a gaggle of kids.

So I invited two families over last week for what I thought was going to be the perfect dinner. Macaroni and Cheese and Steamed Broccoli. While preparing the recipe I was struck by two incongruities: the "breadcrumbs" (which were more like Caesar salad cubes) and the 1/4 teaspoon of cayenne pepper. The latter was my greatest concern as I knew two of my guests were not fans of all things spicy. Yet I figured that a so-called Classic Macaroni and Cheese recipe would have to be made with the child cohort in mind. I rationalized that the minuscule amount of cayenne would only add the slightest hint of spiciness. As for the bread cubes I took the, "well, this might work" attitude and hoped for the best.

I hand-grated the cheeses and worked for over an hour on the recipe, prepping the dish so that it was oven-ready. I must say, it did look spectacular. I was thrilled to be so organized and well-prepared. As the dish sat near the oven, I spooned up a quick taste, and discovered, to my horror that it was bound to be far too spicy for our guests, one of whom is known to cry when she encounters so much as a red pepper flake. I called up the mom to let her know and we devised an alternative plan if the macaroni and cheese didn't work out. My emergency package of Applegate's Best American Organic Hot dogs would have to be called into action.

I also explained the situation to the other mom and she agreed that hot dogs were the best solution. I shuddered at the thought of replacing my homemade hard work with hot dogs but at that late hour, what choice did I have.

When they guests arrived for dinner they were all ravenous. There were two 2 year olds and 3 five year olds. The two year olds actually ate the macaroni and cheese. Izzy ate some of his but his two pals grimaced in pain at the very thought of the spicy mac. One bravely took a swallow and was near tears (oh the drama). I immediately placated them with wienies (which is not my normal m.o. and when Izzy saw his friends eating wienies, he had to have one too, dashing my dreams of delighting the masses with a creamy cheesy meal.

As for the grown-ups, they seemed to like the dish well enough but for me personally it was not the ne plus ultra of macaroni and cheeses. The bread cubes provided a distracting crunch and, truth be told, the spiciness diminished the comforting aspect of the dish. Perhaps I am in the minority for only days later, I read about Martha's Mac on another highly regarded food blog, Smitten Kitchen, and was dismayed with all of the high praise it received.
So where does this leave me? Still searching for a Macaroni and Cheese recipe to rival the one at City Bakery. It may simply be a matter of reducing or eliminating the cayenne pepper and leaving out the bread cubes. Whatever it is, I won't be rushing to figure it out right away since the mood for macaroni and cheese doesn't strike that often.
Posted by Izzy's Mama at 5/14/2008 09:48:00 PM