True. I had grand plans for a three-tiered birthday cake extravaganza. This is what emerged.. A two-tiered lopsided creation. 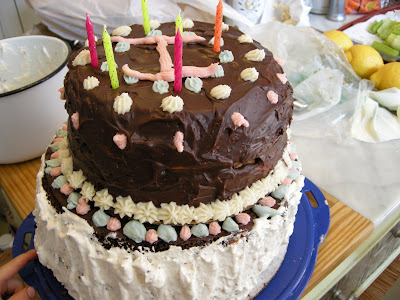 My friend L. decided it looked like a hat. That was a compliment. Granted it was missing the last tier, was tilted to one side and looked like something from a circus. At least there was a cake. Late last night, 1:00 a.m when I didn't have the energy to make the red velvet third tier, A. suggested that he might pick one up at a local bakery (too bad there aren't any). I rationalized that two good tiers would be better than none. So I whipped up some fillings and frostings and went off to bed.

In the morning, in my rush to complete the cake and get on with some other pressing cooking, I made some slight errors in judgement. I hoped that in spite of its odd appearance, it would be luscious. The bottom one was a Devil Dog Cake, filled with marshmallow and raspberry. The top one, called "Fluffy" Lemon Layer Cake was iced and filled with chocolate ganache. I decorated the top with some pastel buttercream.

Sounds good in theory and the Devil Dog Cake was. It was light and creamy. However when I slid the knife through the top tier, I felt its leaden weight. One taste confirmed my fears. This cake was not fit for my consumption. When cake serving time arrived, I warned the guests within earshot to choose the chocolate one. Some chose not to heed my advice, thinking I was just being modest. My friend L. sat down to eat her portion, only to return to tell me that it was like digging into a "boulder."

Izzy was pleased with the cake which is what counts most and when L.'s daughter watched me ice it and looked up at her mom to say, "Why don't you ever make homemade cakes for me?" I decided that there must have been something appealing about the whole messy affair.