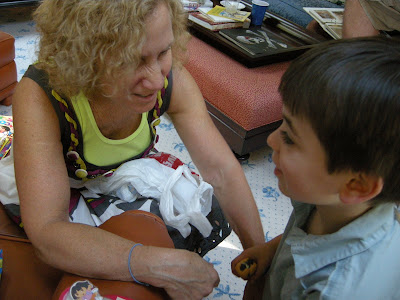 It happened around this time last year and she's back. This time with something even worse, Pez. Nobody can stop her. Her sisters tried to warn me but it was of no use. Once he had the dispenser in hand I couldn't wrench it away from him. He put four candies inside his dispenser and I promptly removed the rest.

An informant told me that he was caressing the dispenser as he examined the goods within. I watched him from afar and when he caught me glancing his way, he quickly hid the booty, slyly pretending to be doing something else. When he knew I was on to him, he ran off giggling.

Later on he asked, "Why do those candies look like medicine? Why don't you eat some too?" It hadn't occurred to me but they do look an awful lot like medication of some kind. Certainly another strike against them.

That's hysterical. Thanks for sharing!

Very funny: I love the notion of the gift of candy as "pushing."

Oh, how I loved Pez as a kid! Just bought two for my kids: not healthy, of course, but a fun surprise to while away the hours of a transcontinental flight...

Anonymous 2: I should say so!

Anonymous 3: Thanks for the Pez info but what are the ingredients?

Anonymous 4:I was a big fan of Pez myself. In general I would rather that Izzy not develop a taste for such things. That being said, Pez might be a lesser evil in the candy department. And no doubt they would be quite entertaining on a plane flight..hmmmm now that he has already been exposed I might just use that trick!

You may be interested to know (again, go to the site) that there used to be a vitamin enriched Pez called "IZO" and Kosher Pez is rare but available too.

I think we've spent enough time on Pez but again, I appreciate the story and the distraction!

Anonymous: Give yourself a name! Thanks for doing the research. The ingredients are worse than I would have imagined. Funny but the package says "Natural Flavor." Now I need to find out what is in cotton candy mix!