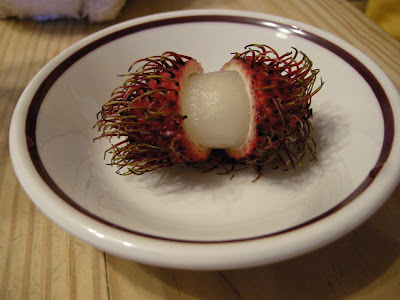 As I perused the produce department at Whole Foods a couple of weeks ago, I did a double take in front of a peculiar Lychee-looking fruit. When I stopped to inspect, an employee informed me that what I was examining was in fact, similar to a Lycee but called a Rambutan. I was intrigued and they allowed me to sample. It was definitely rather Lychee-like in both flavor and texture, though less sweet. I brought home a bagful, knowing that Izzy would be intrigued.

We dissected one together, slicing gently through the tough, wiry exterior, revealing the soft fruit inside. 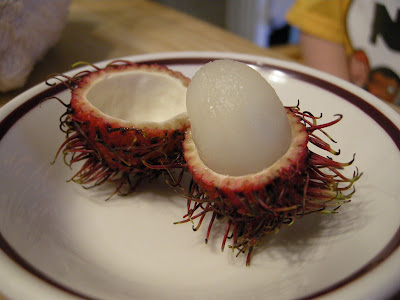 After having consumed the entire bag. Yes. He did like them. We were left with all of these funny, spiky shells.

Izzy immediately put them to good use. 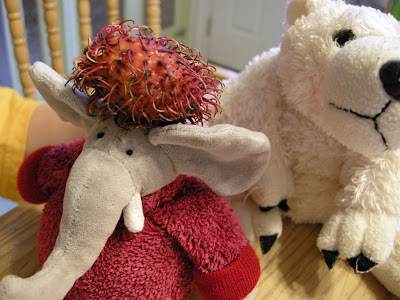 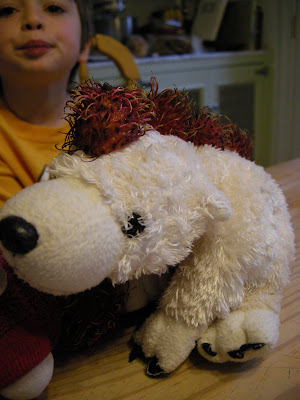 It's oddly beautiful. Does it taste like anything we know? Texture? I have the sense I'd like to whirl some around in my ice cream maker and turn it into a slushee.

Beautiful (both on the plate + on the pate)!

That is just so cute! Now I must go find one for myself.

Sarah: Cute! Izzy had a great time with his Rambutan creations.

Anonymous 2: Favorite post? I am delighted to hear that.

KitchenMage: When I searched this week, there weren't anymore. I will check back.

Foodvox: Maybe Izzy will become a hat designer! I added another picture for your amusement.

I need to get some of these for Elmo. Someone gave someone in our newsroom a TMXElmo and he sits on a filing cabinet staring at me. I think he'd look wonderful in a ramubtan hat! thanks for the inspiration (now my co-workers will definitely think I'm nuts).

I looove rambutans! I discovered them on my honeymoon in Thailand. I love that they look like aliens and that they taste so sweet and refreshing. Nice post!