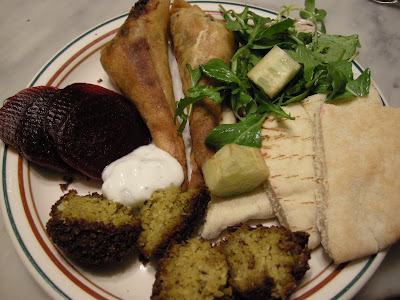 I don't make it to Brooklyn that frequently but now when I do I will be sure to make a stop at Damascus Bakery. It is chock full of fixings for a fabulous "fast food" meal, delicious, nutritious and affordable. I discovered the place on a previous foray to visit Sahadi's, another Brooklyn gem. They are neighbors on the Atlantic Avenue strip and definitely merit a detour. They even merit the $8 toll through the Holland tunnel (since I rarely drive I had no idea it costs that much to cross the river).

I stopped in there today with the sole intent of picking up some of their ultra-fresh and soft pitas ( a steal for less than $1 a bag) and left, $35 later with all manner of goodies for dinner and more. As I made my way to the pita area, I got a whiff of something from over the counter. I zeroed in on these odd-shaped, crispy-looking filo-wrapped pastries and had to find out what was inside. The owner had quite an effective spiel. He told me they were filled with lamb and before I had finished oohing and aahing he asked if I would like a dozen. Since I had never tried one I was hesitant so he handed one over and said "After you try one you I will wrap them up." After one bite he saw I was smitten and he began to box them up even before I gave him the go ahead. I added some falafel balls (50 cents each) hummus, yogurt dip, pitas and halvah to accompany them and I was set for dinner.

As for the lamb pastries, they are reminiscent of Moroccan Briouats which are made with a sweet ground pigeon or chicken (maybe lamb too) encased in filo dough. this rendition also had a hint of something sweet and were crispy, lamby deliciousness.

At dinnertime, I prepared platters for all of us, adding some beets, cucumbers and salad to round out the meal. I look forward to our next excursion to Brooklyn so I can stock up on more of this wonderful food. I will buy extras of everything to freeze so that I will always have the makings of a wonderful Middle-Eastern meal.
Posted by Izzy's Mama at 2/09/2009 10:43:00 PM

yum! let me know next time you go.