Beauty and Food...an odd combination but...

Like many women, I am no stranger to hair removal of some kind. Shaving, bleaching and waxing have been a part of my life since 8th grade and I have not found them to be too painful (aside from the occasional waxing with an inexperienced waxer).

I have long been intrigued about threading, an ancient method of hair removal used in India and elsewhere but didn't know that much about it. It turns out that my friend S. is a big aficionado and she convinced me that it was her preferred hair removal method and we could have it done right here in Jersey City's, Little India for a mere pittance.

My ears perked up at the thought of a trip to Little India. S. may have been planning a depilatory session but I was dreaming about where we should eat. I had been meaning to try the famed Sri Ganesh Dosa House and figured this would be the perfect occasion.

I willingly agreed to join S., all the while thinking that I would merely watch, rather than actually undergo the treatment. So with our highly impressionable children in tow, we set off to visit a threading salon on Newark Ave. The shop turned out to be a run-of-the-mill storefront tucked in amongst the Indian restaurants and shops. I entered with trepidation, having no idea what to expect. I insisted S. go first so that I could worm out of it if it looked too awful but she made it look relatively easy and I decided to give it a whirl. What did I have to lose expect a few excess hairs? 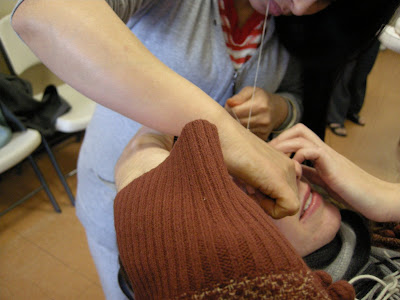 With Izzy beside me no less, I lay down in the chair and accepted my fate. Well it was hideous. I lay there wincing, with my eyes tearing, as the hairs were ripped from their roots, all with the merest wisp of cotton thread. She twisted and twirled that thread over my upper lip until I could barely breathe and I am still smarting from the agony. When it was over Izzy said, "Mama, don't ever do that again. I don't want to see your face look like that." Indeed the sight of me grimacing in pain was not a pretty one (S. kindly photographed it but you won't see it. Instead what you see is S., looking far more poised). When the worst was over, they asked if they could shape my eyebrows ever so slightly too. I have never ever even so much as tweezed a hair off of them but S. insisted that the pain was manageable. Thankfully, it was and the ordeal was over and it was time for lunch.

But lunch didn't turn out so well either, most likely a result of my foul mood after undergoing such pain. I was uncertain as to what to order so we ended up with a hodgepodge of dosas, none of which were exactly what I had in mind. Izzy and T. nibbled on the plain butter one and S. and ate the potato and the spinach/cheese. We tried some other random items as well, one which was Chaat-like, spicy, sweet and crunchy. Tasty though they were I left vaguely dissatisfied, feeling as if we could have ordered better things and wishing I had had more guidance in selecting the meal. 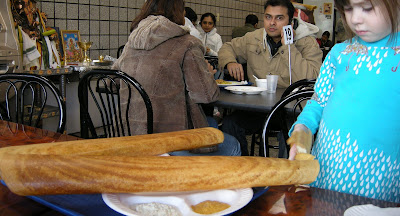 The outing was certainly unforgettable.

Would I go back again, for threading and dosas? Well that remains to be seen. I will have to evaluate the threading results in a few days and get back to you. As for dosas I will certainly give them another try, after doing a bit more research. Maybe next time I won't combine dining and beauty but instead focus on one or the other.
Posted by Izzy's Mama at 2/16/2009 09:25:00 PM

I love this story. Although I am sorry about the pain you had to undergo. (Now I know not to try threading.)

new/old neighbor: I didn't even mention the worst of it which only emerged later..my upper lip is now covered with a white, pimply rash..If you have extremely sensitive skin, threading is not for you!