Pizza Night Is Not For Everyone 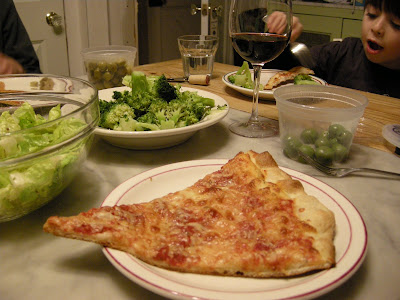 Saturday night was pizza night when I was growing up. This meant that my dad and stepmother were going out and my brothers and I got to have pizza and ginger ale. I can still feel the warm pizza box resting on my lap as I held it upright on the way home from the Fort Lee Pizzeria (I wonder if it is still good or still there). Such an important job it was, making sure the pizza remained intact, no cheese stuck to the top of the box.

I looked forward to pizza night not only because I adored pizza and maybe because that stepmother wasn't the greatest of cooks.


Today, even though I still adore pizza, having a pizza night now never occurred to until my friend H. started her own pizza night on Friday nights. Since we often found ourselves eating with them on Fridays, we fell into pizza night by default, which suited me just fine. Especially since we now live within blocks of two decent pizzerias.

In the beginning Izzy looked forward to pizza night but he has since tired of it. How that can be I couldn't say. I mean I even add homemade salad and broccoli to round out the meal (pizza alone just doesn't suffice).

Apparently Izzy needs something more. Each Friday, Izzy he asks about dinner. When I say pizza, he says sushi. He goes on about how boring pizza is though I never do have to force feed it. I know we won't be giving up my pizza night yet but I may just indulge him in an occasional sushi Friday and see how that goes.
Posted by Izzy's Mama at 2/14/2009 09:04:00 PM