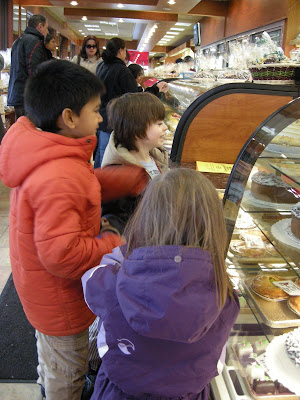 Vacation from school for Izzy this week has meant plenty of time to indulge in pajama days and outings. He and his pals were longing for a second visit to the Staten Island Children's Museum and I was dreaming up a food adventure.

Our visit did not coincide with mealtime but I figured we could at least manage a cannoli detour. My brief search turned up Alfonso's Pastry Shoppe which clocked in at a 3.5 mile drive from the museum. This bakery was touted by many as having the best cannoli on the island.

The children were definitely hungry after two solid hours of play so they were ready for a snack by the time we pulled up. Izzy's friends had never sampled cannoli before. J. was definitely intrigued and he and Izzy each had a large one in the back seat of the car. There was complete silence as they inhaled their food. Izzy barely came up for air.. I am not sure as to what J. thought of his but I am pretty sure it won't down easily. T. did not have the chance to try one as her mom bought her a custardy doughnut instead.

And my review? Alfonso's gets an immediate demerit for having their cannoli filled in advance. Cannoli should be filled to order, so as to keep the shell from getting soggy. That being said, the shell managed to remain crisp enough but the filling was sweeter and heavier than my very favorite cannoli which can be found at Carlo's in Hoboken.

But don't go on my review alone as I am biased toward the lighter, sweeter variety of cannoli. Overall, these are decent cannoli if you happen to be on Staten Island. Check them out on see for yourself.
Posted by Izzy's Mama at 2/20/2009 11:33:00 PM