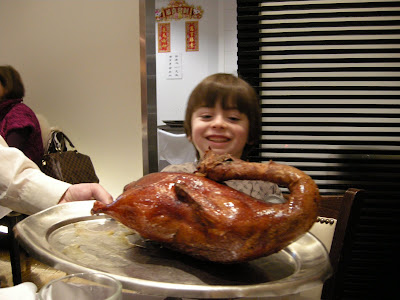 It may be the year of the Ox but we celebrated by eating duck, Peking Duck that is, from the famed Peking Duck House in NYC.

But first we attempted to glimpse the parade. We arrived at the tail end but were fortunate enough to spy a few dragon dances. Izzy had the cat-bird seat, on his papa's shoulders. 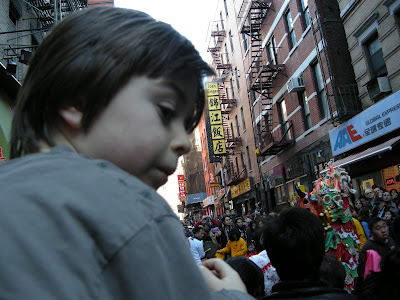 We wove our way through the throngs, pushing through confetti-covered streets, enveloped in noisy celebration. We ate some third rate pork buns and taro custard along the way, but our favorite street food were these tiny "Chinese cakes" we bought from a street cart along Canal Street. They were served hot, straight from their cast-iron mold. These were light oval treats, akin to waffles. Izzy and I made quick business of the 15 for one dollar.

We poked into the crowded shops and Izzy came away with a new pair of chopsticks but overall we just window shopped and then decided on an early dinner.

The Peking Duck House has been on my "to eat" list for a while. I can't get enough of duck of all kinds and from what I had read it was worth the trip. It was not the stellar experience I had hoped for but it was decent enough (perhaps the crowds were a factor). My favorite Peking Duck was eaten years ago at The Shun Lee Palace (East Side) and I haven't had one that measures up since.

Still and all, our Chinatown excursion left us planning the next one. Hopefully we will be back soon, as Izzy is longing for a tiny Chinese satin print coin purse (he lost the one his teacher gave him and has been lamenting ever since.
Posted by Izzy's Mama at 2/01/2009 09:37:00 PM

What a great picture of Izzy and the duck!