A Beautiful Beastly Play and Ghastly Pizza: A High School Production and A Missed Train 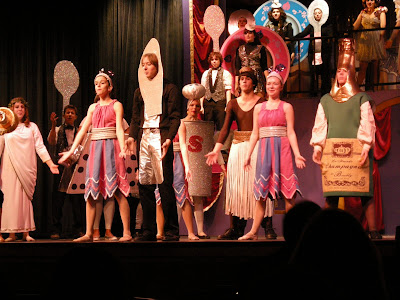 Today's adventure almost wasn't because Izzy kept insisting that he didn't want to see his cousin Jessica in Beauty and The Beast at Hunterdon Central High School, because he had already seen Beauty and The Beast in NYC and Lord knows he would never want to see or listen to the same thing twice... The thought of dragging him along unwillingly held little appeal so I tried to explain that although he had seen one version of Beauty and The Beast, it was the original version and not the Disney one, which would be something entirely different. He wasn't entirely sold but I told him I really wanted to go and he agreed to come along.

And so it was that we boarded the 12:38 train to Raritan, N.J., the closest station to Flemington, where the play would take place. As always, I packed more than enough food as we needed lunch, snacks and possibly dinner since we weren't sure if we would have time to eat after the show. We had avocado/cheese/spinach sandwiches, bananas, mango chunks, yogurt, apples hard-boiled eggs, a croissant and pain au chocolat from Balthazar, prunes and plenty of water. We lunched and snacked along the way, arriving in time for a whirl at a local playground and off to the show.

The play was an unbridled success. Izzy sat, riveted at the edge of my lap, for the entire two and a half hour performance. The students were truly incredible, from the lovely voice of Belle, to the superb acting by Lumiere and everything and everyone else in between. I was in awe of the entire production, which made for quite an afternoon of entertainment.

Of course seeing my lovely niece J., performing so joyously and animatedly, was the icing on the cake. 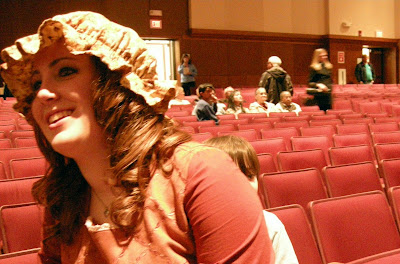 After the show, which ended around 5:30 I made the misguided decision to try to rush and catch the 6:18 train. We missed it by one minute and were stuck in Raritan, with no idea as to where to eat. We happened upon a nearby pizzeria and decided to chance it. I should have known better. It was just my brother G., Izzy and me. My brother is a veganish vegetarian and so we ordered a pizza that was half plain, half sauce and vegetables (sans cheese). Maybe the combination stumped them but our pizza was long in coming and arrived 15 minutes before our next train so we had to have it wrapped to go. This did not bode well.

Pizza picnic on the train for Izzy and me. Well the pizza looked oddly watery and the crust rather misshapen. It was exceptionally salty, with little flavor to the sauce and less in the crust. But we were hungry and for lack of much else, we ate it. My brother, having taken his half home, called to say it ranked as one of the worst pizzas he had ever eaten (and he is not a fussy one, to be sure). Oh well, we would certainly know better next time.

We did make it home in record time and I had Izzy snug in bed not much later than 9 p.m., dozing off as he recalled the exciting day, wondering when he was going to perform himself.
All in all, despite the ghastly pizza, a fine time was had by all. Looking forward to J.'s future high school performances.

Bad pizza is just horrible. I love pizza, it makes me sad when it sucks.

I'm glad you enjoyed the show :)