Out Of This World: Izzy's Sixth Birthday Party

And so it was, that six years ago today, my little Izzy "hatched", or so I told him this morning. To which he replied. "I am not a bird." Indeed he isn't but the fact remains that hatching does seem gentler than what actually happened, now doesn't it?

However he got here, Izzy's birthday is always cause for great celebration and this year we celebrated according to Izzy's wishes and he finally had the space party of his dreams.

I tried to keep it small but even so, it took hours of preparation for our two and a half hours of fun. I had a great time doing it, thanks to some creative help from the internet.

First, since Izzy wanted to dress-up for the party, I found Maggie Blue Designs at Etsy , who made us matching alien costumes in the wink of an eye. With our outfits ready, I was on to more important matters, such as the activities to occupy our bouncy guests.

The first activity would be a "moon rock" hunt in the backyard. Our "moon rocks" were actually rock-shaped soy crayons that I found at Stubby Pencil Studio, an incredible on-line studio with all manner of eco-friendly art supplies and adorable toys. (Kate has a wealth of party ideas and can make up wonderful goody bags if need be.)

When the kids arrived, they each received a small cotton muslin bag in which to collect their rocks, which I had foil-wrapped and hidden around the backyard. When they all had found five rocks, they gathered to trade so they all received a mix of colors.

Next it was on to alien design. After a bit of free play, the children gathered to draw aliens with glitter pens and water color pencils.

Then time for a space-food tasting. Astronaut strawberries and astronaut apples versus the real thing. Surprising that some kids preferred the dehydrated stuff and others simply refused to taste it at all.

The next activity was my hands down favorite... Martian-mallow decorating. I made homemade marshmallows and placed them on long lollipop sticks. The children had pretzel sticks, cocoa nibs and some organic gummy stars to use for decorations. They invented all manner of creatures. 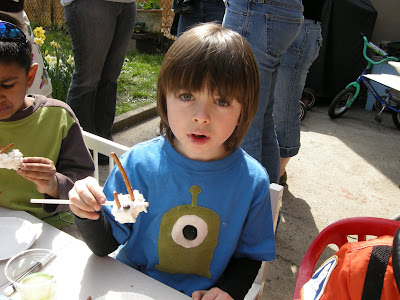 It is plain to see they were quite absorbed in the process... 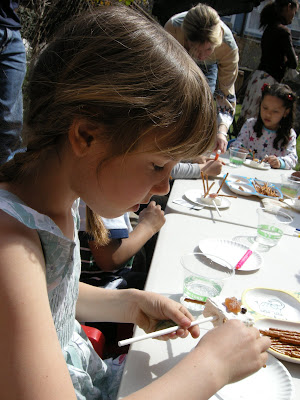 This was followed by some real food..alien eyeball sandwiches, chips and salsa etc. More playtime, then cake. 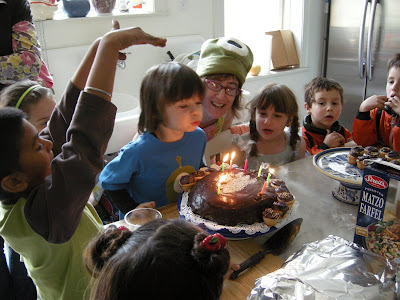 The cake.
I was instructed to make it chocolate with a raspberry filling. Which cake to make? That was the question which I pondered for a long while. It was supposed to be a meteorite with all manner of designs; stars, spaceships etc. In the end, I kept it simple (aside from the fact that I baked it in a bowl) and I decorated it with one silver spaceship. I surrounded it with some mini-vanilla cupcakes. I think it was just right, details will come. This is cake you should become acquainted with.

Cake eaten, there was time for our last activity, "Pass the Asteroid", in which I played "space" music and the kids passed a foil-wrapped packaged around. When the music stopped, the one holding the package got to unwrap a layer and find a space book. The package got passed around until all the guests had received a book. This is definitely a keeper, taken from my friend H. and her British birthday traditions.

And so it was. When all was over, Izzy kept thanking me for all of the various components of the party. We then sat down to open gifts and muse over the goings-on of the day.

All tuckered out, there was no proper birthday dinner for Izzy, just some pierogi and bed, where he is probably conjuring up next year's birthday plan.
Posted by Izzy's Mama at 4/19/2009 08:36:00 PM

What an AWESOME party!

James is about six weeks away from turning 6. He says he wants a Batman party, but he truly loves space ... I wonder if I could convince him to change his mind.

The nice thing about little boys is that most of their passions are somewhat interchangeable, LOL. I could do "Pass the Batarang" instead of pass the asteroid. :)

Eileen: If he wants Batman, keep Batman. I went the route of trying to convince Izzy to have a gardening party last year when he really wanted to have a space one. He agreed to the gardening party and he liked it but he kept dreaming of the space one all year. You could do Batman this year, and space next! Izzy is still thanking me for the party today.

And definitely do "Pass the Batarang" (whatever that is!) The kids really like that activity as I have seen the same kids get excited over and over at our friends' house.